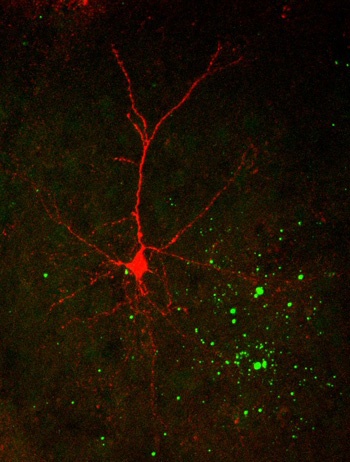 Scientists have discovered what could be causing Alzheimer’s disease sufferers to go on to develop epilepsy.

An international team involving scientists at the University of Aberdeen has revealed that a protein in the brain – which accumulates in clumps in an Alzheimer's brain – is making nerve cells too sensitive.

Overly sensitive nerve cells lose their ability to communicate coherently with other nerve cells. This then makes the brain susceptible to seizures, say researchers who today report their findings in the Journal of Neuroscience.

Around one third of Alzheimer's patients are thought to suffer some degree of epilepsy and some with certain forms of the disease are 80 times more likely to suffer seizures than people without the condition.

Now scientists have discovered how beta-amyloid protein - a key component of the plaques that clog an Alzheimer's brain - is impacting on nerve cells in the brain.

Normal nerve cells communicate by sending electrical impulses to each other. But the scientists have found that this protein is causing cells to short-circuit and fire too many electrical signals.

Professor Tibor Harkany, a University of Aberdeen neurobiologist, co-headed the research, which has produced the first major finding of a European Union-funded international collaboration trying to establish the molecular mechanisms behind memory loss in Alzheimer's disease.

Some of the work has also received funding from the Alzheimer's Research Trust, the UK's leading dementia research charity.

Professor Harkany, Sixth Century Chair in Cell Biology and EMBO Young Investigator, said: "We have shown for the first time the actual cellular process that links epilepsy and Alzheimer's disease.

"Our findings could lead to a rethink of the type of drugs that are given to patients with Alzheimer's disease.

"Some drugs used in the treatment of memory impairment can unfortunately lower a patient's seizure threshold while anti-epileptic drugs can impair the already compromised cognitive functions of Alzheimer's patients.

"It may be that we need to look for new drugs that treat both diseases at the same time."

Rebecca Wood, Chief Executive of the Alzheimer's Research Trust said: "This study explains some of the link between Alzheimer's and epilepsy, adding a piece to the puzzle of what is happening in the brain during dementia.

"By understanding what is happening in the brain, researchers can work towards new and effective treatments that are so desperately needed by the 700,000 people in the UK with dementia."

·         The Alzheimer's Research Trust provides free information to the public on dementia: phone 01223 843899 or visit http://www.alzheimers-research.org.uk/. The charity relies solely on donations to fund its research.