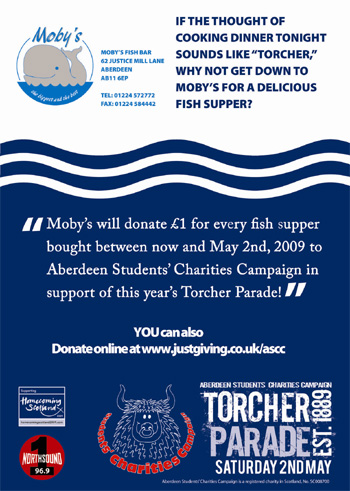 Fish suppers are set to batter up an all important funding boost for one of Aberdeen’s most historic charity events.

The city's Moby's Fish Bar has pledged support for the Aberdeen Torcher Parade by donating £1 from every fish supper sold from Monday (March 23).

The promotion will run until Saturday 2 May – when the annual carnival event will see an array of colourful floats make their way through the city to raise thousands of pounds for North-east charities.

A crowd of over 10,000 regularly line the streets for the popular parade which is traditionally financed by support from local businesses.

But the Aberdeen Students' Charities Campaign who organise the event have been struggling to find a sponsor this year due to the current economic downturn.

They are now encouraging the public to get behind the parade by eating fish and chips for charity to drive up the essential funding support needed.

"We've been looking for a sponsor for the Torcher Parade for a couple of months now but a lot of companies are unable to offer sponsorship in such tough economic times", said Sandy McKinnon, Vice President Charities, University of Aberdeen Student Association. "We think that if Aberdonians make a few extra trips to Moby's for a fish supper they'll not only be supporting the Torcher Parade but also enjoying a great meal at the same time. Everyone's a winner!"

Moby's Manager, Murray Morrison said, "We sell anywhere in the region of 100 fish suppers per week which could amount to over £800 for the Torcher Parade. Any increased business on fish suppers will go towards the success of this year's event on May 2nd."

The Torcher Parade depends on local businesses in terms of donating lorries and supplies.

Shannon Tubby, Events and Fundraising Coordinator for Aberdeen University Students' Association said they normally looked for one large overall sponsor to finance the parade but hope the local community will get behind this new stream of support and fill their stomachs for this historic event.

She said: "Traditionally the Torcher Parade has been supported by one main sponsor, but it seems that companies are not willing to make that kind of a financial commitment so we knew we needed to adjust our packages to fit the current financial climate businesses are operating in. Working with Moby's is an ideal opportunity for us to make some much needed money to put towards the event"