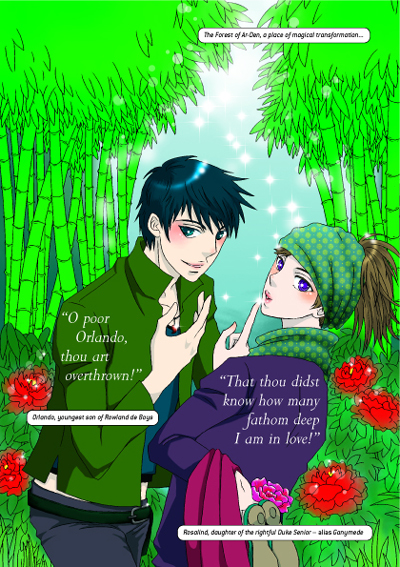 Some of Shakespeare’s most famous scenes are set to be given a comic book twist following the launch of a new competition.

Word 09, the University of Aberdeen's Writers Festival, has teamed up with manga publisher SelfMadeHero to challenge young Scots to illustrate a well known scene from one of the Bard's plays.

Using a shortened version of the original text, entrants are asked to create their own manga adaptation of famed Shakespearean moments, including the balcony scene from Romeo and Juliet, and the first meeting of the witches in Macbeth.

The Manga Shakespeare Competition is just one aspect of Word 09's celebrations of the Japanese comic book phenomena.

A host of workshops and events have been introduced to the festival line up for the first time to mark Japan-UK 150 – a series of UK wide events commemorating 150 years of friendship between the two countries.

Open to children from throughout Scotland between the ages of 12 – 18, the winning entrant to the manga competition will receive:

Emma Hayley, Publishing Director at SelfMadeHero added: "SelfMadeHero are delighted to be involved in Word 09.  Scotland has a strong cartooning tradition and manga has proved very popular over the last five years. We're particularly looking forward to meeting the next generation of Scottish comic book artists during the festival."

The Manga Shakespeare Comics Competition will be judged by Professor Spence, Emma Hayley, Publishing Director SelfMadeHero, and Chie Kutsuwada, artist on Manga Shakespeare's version of As You Like It.

The shortened version of the Shakespearean scenes and the competition entry forms can be downloaded by visiting http://www.abdn.ac.uk/word/programme/competition/

Or a printed application pack can be requested by emailing word@abdn.ac.uk or calling 01224 273726.

The winner of the competition will be announced on Monday 4 May 2009.

The Manga Shakespeare Comics Competition is open to all permanent residents of Scotland between the ages of 12 and 18.

SelfMadeHero is an independent graphic novel publisher based in London. Emma Hayley – Publishing Director of SelfMadeHero – was named UK Young Publisher of the Year, as part of the British Book Industry Awards 2008.

Manga Shakespeare is a series of graphic novel adaptations of William Shakespeare's plays. A fusion of classic Shakespeare with manga visuals, these are cutting-edge adaptations designed to intrigue and grip readers. Drawing inspiration from trend-setting Japan and using Shakespeare's original texts, this series brings to life the great Bard's words for students, Shakespeare enthusiasts and manga fans. Its attractive art and simple storytelling methods enthuse readers to approach Shakespeare's work in the way he intended – as entertainment. The Manga Shakespeare series includes: Romeo and Juliet, Hamlet, The Tempest, Richard III, A Midsummer Night's Dream, Macbeth, Julius Caesar, As You Like It, Othello, Henry VIII, Much Ado About Nothing and King Lear.

Japan-UK 150 is a series of events in the UK organised to celebrate 150 years of friendship between the two countries.  The celebrations will run from autumn 2008 until the end of 2009, featuring a wide range of activities designed to encourage exchange in such fields as culture, the arts, sport, education and science.