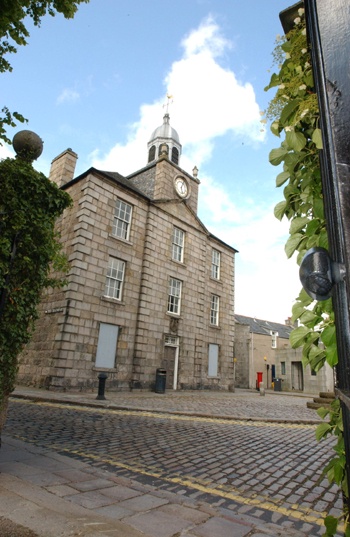 The restoration of one of Old Aberdeen’s most famous landmarks will be complete today (Thursday July 30) when its clock chimes again for the first time in more than half a century.

The Old Town House, which serves as a gateway to the University of Aberdeen, underwent a £800,000 transformation, completed in 2005.

It had lain unused for 15 years and was restored to its former glory thanks to the University and the Heritage Lottery Fund.

The 200-year-old building, which is Grade A listed, was sympathetically refurbished and its original features were reinstated.

But the project did not include funding for the restoration of the chimes and when the clock struck the hour, they remained silent.

Today, at 12 noon, that will change thanks to the efforts of the Old Aberdeen Heritage Society.

Members have been fundraising for the project, which has cost around £2,000, since Autumn last year.

They received a donation from the Aberdeen Students Charities Committee, money from Old Aberdeen Community Council and individuals, and sold a greetings card with a picture of the Old Town House, as it would have looked before St Machar Drive was constructed, to raise further funds.

Morley Hutchinson, chairman of the Old Aberdeen Heritage Society, said reinstating the chimes would complete the successful restoration of the Old Town House.

“When we decided to embark on a restoration programme we had tremendous interest from local residents and visitors alike who felt it was only fitting for a building like this.

“The Old Town House has been beautifully restored and is now a centre piece for Old Aberdeen once again.

“It will be fantastic to hear the bells chime when the clock strikes noon.”

A short ceremony will be held to mark the occasion attended by representatives of the University of Aberdeen, the Old Aberdeen Heritage Society, the Aberdeen Students Charities Committee, and local residents.

The bells will operate on a timer from 9am to 10pm to avoid disturbance to local residents.

Professor Chris Gane, Head of the University’s College of Arts and Social Sciences, said: “The Old Town House is a focal point of the University and is a reminder of the centuries of history in Old Aberdeen.

“The once-neglected town house has already been brought back into daily public use as an information and reception facility. It is an outstanding building and the chiming of the bells will complete its transformation.”