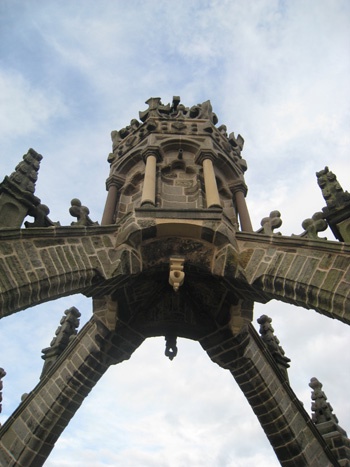 The restoration of one of Aberdeen’s most photographed landmarks has been recognised by the Royal Institution of Chartered Surveyors in Scotland (RICS Scotland).

King's College Crown Tower has been commended in the building conservation category of the RICS Scotland Awards 2009 for being carefully preserved by expert craftsmen using traditional methods and materials.

RICS Scotland director Graeme Hartley said: "The Crown Tower is iconic and the way in which it has been restored and conserved deserves recognition which is why the project has been commended by the RICS Scotland judges. My warmest congratulations go to all those involved".

Angus Donaldson, Director of Estates, said: "The Crown Tower is a spectacular piece of 16th century architecture of which the University of Aberdeen is very proud. We are obviously delighted that the project to restore it to its former glory has now been recognised by RICS Scotland. I am particularly pleased for our project manager Robert Watson who planned, managed and delivered this high-profile project so effectively and efficiently.

"From the stonemasons, conservationists, scaffolders, clerk of works, design team and the whole project team, everybody has had a passion for working on one of the nation's most historic buildings.

"Those fortunate enough to have been on the 'once in a lifetime' tour of the works, marvelled at the conservation being done and the workmanship of the original builders. Whilst carrying out the stone repairs we also discovered more about the techniques used by the original builders, which helps in our understanding of the building."