Century celebrations of bird ringing
07 May 2009 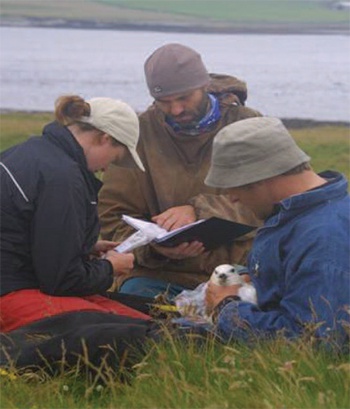 A pioneering project which paved the way for our understanding today of the incredible journeys and lifestyles of birds is being celebrated at the University of Aberdeen.

Exactly 100 years ago this Friday, University student Arthur Landsborough Thomson and some friends, became the first in Britain to put individually numbered rings, with a return address, on birds' legs in order to study them.

The first birds ringed, on 8 May 1909, were six young lapwings at the Sands of Forvie in Aberdeenshire, and a young starling at Inverurie.

The first long-distance recovery of a small songbird was a song thrush ringed at Skene House, near Aberdeen and recovered in Portugal. It had been marked by Daisy Hamilton, the first woman to ring birds in the project.

The Aberdeen study ended during the First World War before merging with a scheme that had started in London – shortly after Landsborough's – which was later taken over by the British Trust for Ornithology.

Since those early days more than 35 million birds of 250 species have been ringed in Britain and Ireland.

Building on the work of those early pioneers, volunteers working with the British Trust for Ornithology now ring 850,000 birds in Britain and Ireland each year.

To mark the launch of the Aberdeen project and 100 years of organised bird ringing, a display is being staged at the University's Zoology Museum from this Friday.

Included are some of the original bird rings and a tiny modern data logger which can track the movements of an individual bird for a whole year.

She said: "Through ringing we now know much more about the migration, movements and survival of our birds. This helps us understand how bird populations respond to environmental change and to predict risks from diseases such as Avian influenza."

Dr Alan Knox, Head of the University's Historic Collections, also organised the display. He added: "One hundred years on, bird ringing is still integral to major research projects in ornithology and ecology at the University of Aberdeen and around the world. Ringing has been one of the most important research techniques in ornithology for all that time.

"The University has been ringing fulmars on Orkney for 60 years now, and this has provided fascinating insights into their survival, reproductive successes and responses to environmental variation. One bird in this study is now at least 41 years old.

"Long term ringing of starlings on Fair Isle has shown how individual birds move around the landscape and how this affects population size and structure.

"The University of Aberdeen should be very proud of the key role one of its students played in laying the foundations for bird ringing today."

The 100 Years of Bird Ringing display will be on show at the front of the Zoology Museum over the coming weeks and is open to all.

More about bird ringing can be found at www.bto.org/ringing, including details of how to report a ringed bird you might have found.

Dr Jane Reid and Dr Alan Knox are away from Aberdeen this week but are available for phone interviews. To arrange, please contact Jennifer Phillips on 01224 273174.