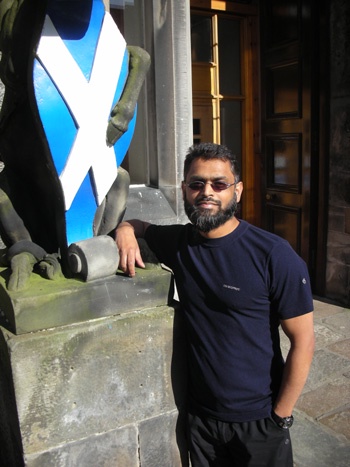 A former Guantanamo Bay prisoner will give a free public talk at the University of Aberdeen tonight (Monday, May 11).

Moazzam Begg, the Briton who spent over two years in the controversial detention camp as part of the Bush administration's so-called War on Terror, will appear at the Arts Lecture Theatre, King's College at 7pm.

The event, which is free to members of the public as well as staff and students, has been organised by the University's Amnesty Society.

Organiser Julia Stach said: "We are delighted to welcome Moazzam to Aberdeen. As a result of his years under detention he is still not officially allowed to travel outside the UK but he continues to draw attention to the plight of Guantanamo prisoners and other detainees held as part of the War on Terror."

Begg now has an advisory role with several NGOs, including Reprieve, Amnesty International and the Centre for Constitutional Rights and gives regular talks on issues including imprisonment without trial, obtaining evidence through the use of torture and issues relating to anti-terrorism legislation.

He also appeared in the documentaries Taking Liberties and Taxi to the Dark Side, the latter film an Oscar-winner in 2007.

In 2001, as a way of helping the Afghan people, Begg says he moved to Kabul to build schools offering basic education to both girls and boys. He also brought water pumps. But the allied attack on Afghanistan soon forced his family to evacuate to Islamabad in Pakistan.

It was there he was arrested in January 2002 by Pakistani police and CIA officers and detained for nearly a year before being moved to Guantanamo Bay for a further two years.

He was declared an 'enemy combatant' – a term since dropped by the Obama administration – and accused of receiving training by al-Qaeda in Afghanistan. According to his statements, he was tortured at Guantanamo.

After prolonged negotiations between the UK and US governments, six UK Guantanamo detainees, including Begg, were released on January 25, 2005. Since then he has published highly acclaimed articles and a book – Enemy Combatant: The Terrifying True Story of a Briton in Guantanamo – about his experience.

Begg is also a spokesperson for Cageprisoners and has a strong interest in community relations.

The Arts Lecture Theatre is located on King's College Campus between the University Office and the William Guild Building. The lecture will take place at 7pm on Monday, May 11. All are welcome on a first come first served basis.

Issued by
The Communications Team
Directorate of External Relations, University of Aberdeen, King's College, Aberdeen
Phone
+44 (0)1224 272014
Issued on
11 May 2009