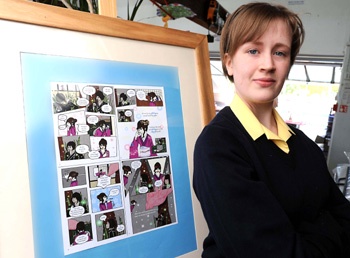 A creative Aberdeen school girl has scooped top place in a national art competition by giving a modern comic book twist to a Shakespearean classic.

Mairi Rapach, who is a third year senior pupil at St Margaret's School for Girls, recreated the famous balcony scene in Romeo and Juliet in the style of manga, a famous genre of Japanese comics and anime.

The competition is part of the Word Festival, which will celebrate the Japanese art form this weekend (May 15-17) as part of over 130 literary events taking place at the University of Aberdeen and at venues across the city.

Mairi (14) depicted the Shakespearean scene as the conflict of the Meigi period from early 20th Century Japan.

She drew all the pictures by hand and then used layers in photoshop to develop colour, gradient and pattern,

The competition was open to youngsters from across Scotland aged between 12 and 18.

"Mairi has done fantastically well to have won first place in this national competition. She has used a combination of drawing alongside computer software to create her unique artwork. At St Margaret's we are very keen on marrying traditional art and craft with modern technology."

Alan Spence, Word Artistic Director and one of the competition judges, said the panel had been very impressed with Mairi's creations.

"They loved the fact that Shakespeare's words were used in the art work and that she had used different perspectives," he said.

"As well as admiring the colours and techniques that Mairi had used, they felt that the spirit of manga had been captured in her pictures. The quality in the competition was incredibly high and it was difficult to make a decision but we felt that Mairi's work was a clear winner."

Mairi's prize includes a place at the Word Festival's Manga Shakespeare workshop, tickets for a Japanese animated film, books from the Manga Shakespeare series, a manga drawing pack and Friends of Word 2010 membership.

Manga events at this weekend's Word Festival include a screening of the award-winning The Girl Who Leapt Through Time (Toki O Kakeru Shojo) at the Belmont Picturehouse on Saturday, May 16; and a Rise of Manga panel event at King's College Centre on Sunday May 17. The latter will feature manga artists Kiriko Kubo and Chie Kutsuwada.

Word 09 officially kicks off on Thursday night with The Way of the Drum – a celebration of traditional Taiko Japanese drumming in King's College campus's Arts Lecture Theatre.

Issued by
The Communications Team
Directorate of External Relations, University of Aberdeen, King's College, Aberdeen
Phone
+44 (0)1224 272014
Issued on
12 May 2009