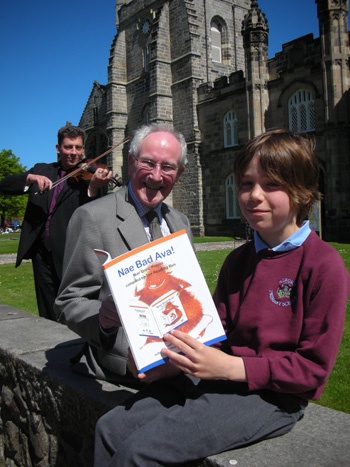 A new anthology of Doric verse was launched by weil kent broadcaster Robbie Shepherd today (Thursday, May 14) as part of the Word Festival celebrations.

Nae Bad Ava! is the follow up to the hugely successful Fit Like, Yer Majesty? which has sold over 11,000 copies since being published by The Reading Bus last autumn.

Vincent, an Alford Primary School pupil, contributed a poem called Strange Mannie to the book, which also includes compositions penned by the P5s from Cornhill School and Alford's P5/6 class.

Robbie Shepherd were joined at the launch by over 80 guests including singer and broadcaster Fiona Kennedy, fiddler Paul Anderson and Scotland the What star and University Rector, Stephen Robertson. Ann Begg MP and the Lord Provosts from both the City and the Shire also attended.

Jenny Watson, Reading Bus Co-ordinator, said: "Sales of the first anthology far exceeded all our expectations and brought a lot of pleasure to a wide range of readers.

"We're delighted to now be able to publish a second volume of verse celebrating the rich culture and heritage of the North-east of Scotland. The Reading Bus is all about promoting the joys of reading to youngsters and their parents so we are particularly delighted that three of the poems in this new collection are by primary age pupils."

Nae Bad Ava! is published by Reading Bus Press.  The new anthology was produced as part of a partnership with Aberdeenshire Council and the University of Aberdeen with funding from Talisman Energy.

Contact the Reading Bus www.readingbus.co.uk/ for a copy of the book.

The Word Festival takes place at King's College campus and at venues across the city from May 15-17. Around 11,000 visitors are expected over the festival weekend. For more information visit www.abdn.ac.uk/word/ or call Aberdeen Box Office on 01224 641 122 for tickets.

Issued by
The Communications Team
Directorate of External Relations, University of Aberdeen, King's College, Aberdeen
Phone
+44 (0)1224 272014
Issued on
14 May 2009