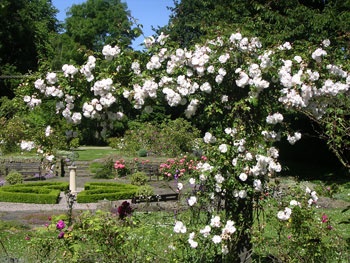 One of Aberdeen’s most magnificent gardens – deemed one of Britain’s best places to see rose displays - is extending its opening hours.

The century old Cruickshank Botanic Garden - partly owned by the University of Aberdeen - normally opens to the public between 9am and 4.30pm Monday to Friday all year round and from 2pm to 4.30pm on Saturday and Sunday between May and September.

But from this Saturday (May 16) the 11 acre garden is opening its gates to the public in the evenings every day of the week for a trial period of six weeks so that more people have the chance to enjoy its charms.

Professor Ian Alexander, Regius Professor of Botany at the University of Aberdeen, is Keeper of the garden. He said: "If you have ever wondered what lies behind the high granite wall that runs along St Machar Drive between Tillydrone roundabout and The Chanonry in Old Aberdeen now is your chance to find out.

"The Cruickshank Botanic Garden is a haven of peace and tranquility and a treasure trove of botanical and horticultural inspiration.

"Here can you find magnificent old trees, rolling lawns, rock and water gardens, a rose garden, a great herbaceous border and much else to delight the senses.

"The Cruickshank Botanic Garden is often described as a hidden treasure and we certainly hope Aberdonians come along and see its splendour for themselves over these next six weeks."

There is no admission fee to the Garden which will be open each night until 9pm. Entrance is through the gate in the Chanonry.