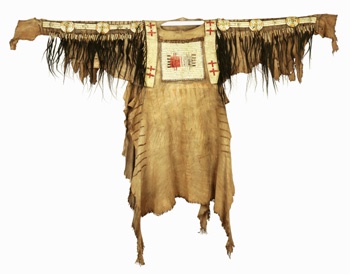 Rare First Nations artefacts dating back to the early 19th century will be publicly exhibited in Canada for the first time next year, it has been announced.

Five spectacular Blackfoot men's shirts – some of which are decorated with porcupine quillwork, hair and painted designs – have been in the collections of the Pitt Rivers Museum at the University of Oxford since 1893.

Their planned journey back across the Atlantic began when Blackfoot elders asked university and museum staff to find ways of making historical artefacts kept in Britain accessible to their communities.

Dr Alison Brown, an anthropologist at the University of Aberdeen, and Dr Laura Peers, Curator of the Americas Collections at Pitt Rivers Museum – who have both worked with Blackfoot communities for a number of years – have now received a grant from the Arts and Humanities Research Council (AHRC) to make the project happen.

Public exhibitions of the shirts will be held in 2010 at museums located in traditional Blackfoot territory – the Glenbow Museum in Calgary and the Galt Museum in Lethbridge.

Frank Weasel Head, from the Kainai Nation in southern Alberta, said: "This project is about bringing our history back to our people; seeing these shirts will give our young people a sense of pride."

The shirts were collected in 1841 by Sir George Simpson, the Governor of the Hudson's Bay Company. As well as the exhibitions, there will be handling sessions for Blackfoot people so they can study the shirts closely and learn about the manufacturing techniques and their cultural meanings.

Dr Brown said they called the project 'These shirts are our curriculum' after a Blackfoot elder explained how important the items were to his community.

"Being able to work with Blackfoot students in the community schools and colleges, people who rarely have the opportunity to engage with such important artefacts, is something we are especially looking forward to," said Dr Brown.

The project will include a conference at Pitt Rivers Museum on how to provide culturally appropriate care for Blackfoot materials in museum collections.

Dr Peers, the project director, added: "We are so pleased to be able to make the shirts available for Blackfoot people to study. Very few early garments such as these exist in Canada and we hope that being able to touch and explore the shirts close up will help to preserve cultural knowledge amongst Blackfoot communities. We also look forward to learning more about the shirts and their historic uses and meanings, and about how Blackfoot people think about them today".

The Blackfoot people live on three reserves in southern Alberta, Canada, the Kainai Nation, the Piikani Nation and the Siksika Nation, and one reservation in northern Montana, USA.

Dr Alison Brown and Dr Laura Peers had an earlier AHRC-funded project with Kainai people: Photo-elicitation among the Kainai Nation: a cross-cultural re-engagement with history.  The book which resulted from this project was published in 2006 by the University of Toronto Press and is called Pictures Bring Us Messages: Photographs and Histories from the Kainai Nation.

Each year the AHRC provides funding from the Government to support research and postgraduate study in the arts and humanities, from archaeology and English literature to design and dance. Only applications of the highest quality and excellence are funded and the range of research supported by  this investment of public funds not only provides social and cultural benefits but also contributes to the economic success of the UK. For further information on the AHRC visit http://www.ahrc.ac.uk/

The Pitt Rivers Museum website is at http://www.prm.ox.ac.uk/.  The Museum will be reopening to the public on 1 May 2009.