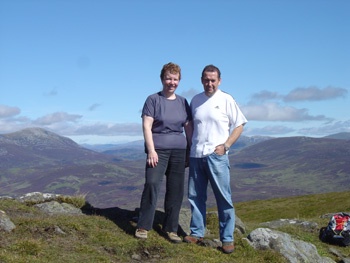 Doing a 95 mile sponsored walk is enough of a challenge for most people, but not for married couple George and June Johnson.

After spending seven days trekking the West Highland Way, the Johnsons will tackle Scotland's highest peak Ben Nevis, the day after they finish their gruelling walk.

And their endeavours - which begin tomorrow (Thursday) - are certainly paying off.

So far the pair have raised over £5,500 for local cancer charity CLAN which has launched a major fundraising drive to build a new Cancer Support Centre.

Fifty-four year old George, a clerk of works with the University of Aberdeen's Estates, said: "June and I are originally from Shetland and some members of our family and friends have been affected by cancer.

"CLAN have been tremendous in providing accommodation and support for families, some of  whom have had to travel to Aberdeen for treatment, and that is why we decided to raise money for the CLAN123 campaign which will pay for a new centre and haven."

George and 48-year-old June, a senior architectural officer with Aberdeen City Council, are regular gym goers but have also been doing lots of hill walking in preparation for their challenge.

Added George, who lives in Udny: "We originally set a target to raise £4,000 and we are absolutely delighted that we have exceeded that. Family, friends, work colleagues and contractors have been tremendously generous in their support for what is a really good cause and we would like to thank them all."

Susan Crighton, Fundraising Manager, CLAN, added: "Walking the West Highland Way would in itself have been quite an achievement, but the fact George and June are also going to tackle Ben Nevis makes their efforts even more admirable.

"We are extremely grateful to them for choosing to support CLAN, as it is donations such as theirs which enable us to continue to provide the services we do, not only to those affected directly by cancer, but also to family and friends."

Anyone wishing to sponsor the Johnsons can do so via this link: http://www.justgiving.com/junejohnson