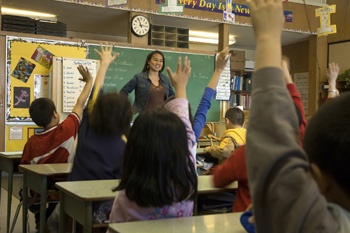 As the challenges facing the future of the planet increase, the way in which scientists of the future are taught becomes ever more important.

A new book, drawing on almost 15 years of research by academics at the Universities of Aberdeen and Turin, hopes to change attitudes to the teaching of the subject, which it is argued will improve our understanding of global challenges.

Science, Society and Sustainability - Education and Empowerment for an Uncertain World, illustrates how redrafting the agenda in science and technology could have a revolutionary impact on learning and teaching in the classroom at all levels.

Dr Colucci-Gray, a lecturer on the University’s Scottish Teachers for a New Era project, says the book pulls together nearly 15-years of collaborative work by academics in both Aberdeen and Turin across a broad range of subjects.

“The book looks at the question of how do we need to educate people in the sciences so that they can tackle issues of environmental sustainability?” she said.

“With global challenges like changes in biodiversity, climate, the availability of natural resources and energy, this has never been more important.

“That creates a problem from an academic point of view as these issues are on such a large scale that they cross traditional subject boundaries.

“We want to open people’s minds to a more interdisciplinary approach which could reap rewards, improving science education and producing a new generation of scientists better equipped to tackle such problems.”

Science, Society and Sustainability argues that approaches to education in science tend to perpetuate an outmoded way of thinking, which fails to prepare individuals for participation and decision-making in an uncertain, complex world.

It draws on work by lecturers and researchers in a broad range of fields, including evolutionary biology, the philosophy of science, political sociology and education. Most of the contributors are part of the Interdisciplinary Centre for Research (IRIS) on sustainability based at Turin University (http://www.iris.unito.it/), which includes members from Italy and abroad.

The production of the book was assisted by funding from the University of Aberdeen’s College of Arts and Social Sciences.

Dr Colucci-Gray added: “We want to promote a view of the world and its natural systems that is integrated by means of a science education which does not crystallise and fragment everything.

“We want a framework of teaching that takes this as its core point and believe it could greatly improve and enhance the quality of science teaching for the benefit of all.”

Science, Society and Sustainability - Education and Empowerment for an Uncertain Worldis published by Routledge Research in Education and is on sale now.

The Scottish Teachers for a New Era (STNE) project was established at the University of Aberdeen in 2004.

The programme received £1.8 million from the Scottish Government and The Hunter Foundation to set about changing the way trainee and new teachers are educated and supported.

While the book is not a product of the Scottish Teachers for a New Era initiative, on which both Dr Donald Gray and Dr Laura Colucci-Gray work, many of the principles in the book have contributed to thinking around the research into initial teacher education in the STNE project.