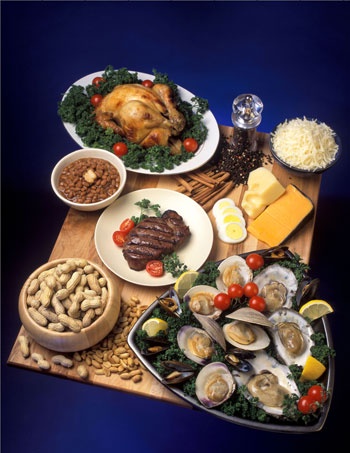 Aberdeen scientists are seeking 100 healthy male volunteers for a £1 million study to understand how zinc from food can affect human metabolism.

The research will use breakthrough technology to measure chemical changes taking place within the body as a result of eating different amounts of zinc in food.

The study will aim to produce a test that can be used to identify zinc deficiency – a condition which in most severe cases can result in reduced growth, delayed puberty, delayed wound healing, taste abnormalities, poor mental function and poor appetite.

According to figures from the World Health Organisation one third of the global population is zinc deficient, which in the UK may include children and adolescents eating a poor diet, pregnant women and the elderly.

Eating more food which contains zinc is known to boost the immune system and can help prevent infections such as colds and flu.

Development of a reliable test to measure zinc levels in the body has been unsuccessful to date.

The study – which is led by Dr John Beattie, a leading expert in zinc nutrition from the University of Aberdeen Rowett Institute of Nutrition and Health - will employ technology called metabolic fingerprinting, to analyse the changes in the human body caused by varying zinc levels.

Dr Beattie said: "Lack of zinc in the human body is known to be the cause of severe and wide-ranging health conditions.

"Ongoing research being conducted here at the University of Aberdeen Rowett Institute of Nutrition and Health shows that zinc deficiency may even encourage the development of heart disease over a lifetime".

"Our study will use a cutting edge technique called metabolic fingerprinting to help understand the impact of zinc on a person's metabolism.

"Like a fingerprint, the pattern of chemicals – known as metabolites - found in the human body and measured in body fluids, is unique in each person.

"In the study we will investigate how eating foods which are either low or high in zinc can cause changes in the pattern of these metabolites.

"Using metabolic fingerprinting, we will be able to identify the metabolites which are most affected by zinc in each person.  This will then allow us to assess the affected metabolites and their use as indicators of zinc levels in the body.

Scientists from the universities of Colorado and Aberystwyth will collaborate in the study which is funded by the Food Standards Agency.

One hundred healthy men aged 18-45 are being sought to take part in the research.

Volunteers should be local to the Aberdeen and Aberdeenshire area or willing to travel to the University of Aberdeen Rowett Institute of Nutrition and Health where the study will be conducted.

Volunteers will be provided with a diet which is either high or low in zinc over a 10 week period.

Dr Beattie said: "We will provide volunteers with their daily food for a 10-week period, and they will be able to live their normal working life without restriction.

"Valuable contributions to this study from collaborators Professor John Draper at the University of Aberystwyth in Wales and Professor Nancy Krebs at the University of Colorado, Denver, USA ensure that we have the best available world expertise for the measurements that we need to make on samples from volunteers.

"The study presents a significant opportunity for those who volunteer to take part in research which has a far-reaching impact nationally and internationally."

Members of the public wishing to volunteer for the study should contact Sylvia Hay on 01224 716607, email Sylvia.hay@abdn.ac.uk  or visit www.rowett.ac.uk/zinc