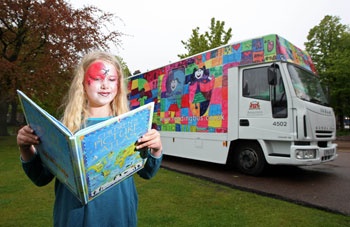 Sunshine, sold-out events and a wealth of words heralded the end of another hugely successful Word Festival today (Sunday, May 17).

Word 09, sponsored by Talisman Energy, took place from May 15-17 in the grounds of the University of Aberdeen and at some of the major arts venues throughout The Granite City.

A dousing of rain failed to prevent record ticket sales and an estimated 11,000 festival visitors being treated to a packed weekend of readings, music, art exhibitions, and film screenings from over 60 authors, musicians, poets and artists.

The festival, which also saw hundreds of youngsters descend on King's College campus for the Marathon Oil Children's Festival, closed with an evening of traditional Scottish music and dancing with Aberdeen's all-girl ceilidh band, Danse McCabre at Elphinstone Hall.

Alan Spence, Word Artistic Director, said: "At the start of the weekend we thought the weather might put a dampener on events but instead there was a real blitz spirit.

"We had twice as many events at this year's festival and the feedback we had from authors and audiences was overwhelmingly positive. Without a doubt, it's been the best festival yet.

"Throughout the weekend there were some truly sublime moments, such as Carol Ann Duffy reading as part of a fantastic evening at The Lemon Tree, an event which would have graced any festival in the world.

"We say it again and again, but there really isn't anything like Word anywhere else. The sun reappearing on Sunday was the finishing touch on what was another memorable weekend."

Talisman Energy (UK) Limited Vice President of Legal and PR/CR, Jacquelynn Craw said: "It was an honour for Talisman to be the first ever headline sponsor of the Word Festival. Education and the arts are two of the areas in which we have developed award-winning partnerships with a wide range of organisations, of which the University of Aberdeen's Word Festival is a shining example."

Issued by
The Communications Team
Directorate of External Relations, University of Aberdeen, King's College, Aberdeen
Phone
+44 (0)1224 272014
Issued on
17 May 2009