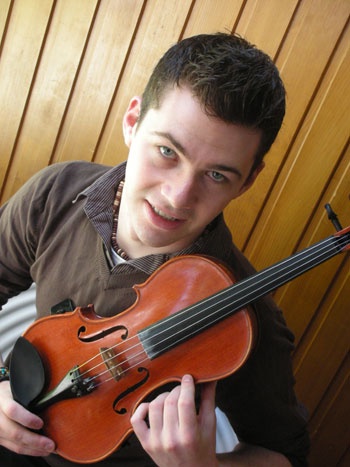 An enterprising Aberdeen music student has added an innovative string to his bow by securing the top prize in a prestigious entrepreneurial competition.

Chris Williamson, a third year music student at the University of Aberdeen, scooped the winning entry in the Scottish Institute for Enterprise's (SIE) New Ideas Competition, with his pioneering solution to an age old musical problem.

The competition invited students and recent graduates in Scotland to submit their idea for a new business, product or entirely new invention.

20-year-old Chris's concept for a revolutionary violin peg, which enables quicker, easier and more accurate turning of a violin or any other stringed instrument, hit the right note with the judges.

He was chosen from over 100 submissions to win the hotly contended accolade.

Chris received a £2000 cash prize for his achievement and business support for a year, to help him turn his winning concept into a reality.

Chris, who is originally from Keith, said: "My idea for an alternative to the traditional tuning peg found on a violin had been growing over a number of years.

"Violinists find that when tuning their instrument, their hand can sit at an awkward angle due to the position of the peg and therefore become strained during the process.  This can make tuning difficult to control and often violin strings can be broken due to this.

"The peg which I invented allows the angle at which your hand sits during tuning to be changed to make it more comfortable for the individual user."

Chris hopes his idea – which has now been patented – could eventually be developed by a manufacturer, and marketed.

Chris continued: "When I entered the competition I didn't think that my business idea would get to the final let alone win the top prize.  But winning has given me a real boost in confidence to consider making a future career out of my violin peg concept.  My ambition now is to work hard on developing the idea with the hope that it will one day make it onto the market."

Simon Fraser, the SIE Regional Business Adviser for Aberdeen & the North, commented: "We are delighted to see Chris win the national SIE Ideas Competition. His idea has tremendous potential, and we're currently working with Chris to develop it further and help him achieve its maximum potential.

"SIE have been working closely with staff at the University of Aberdeen for the last two years, to develop and support the emerging enterprise culture within the student body. It's really encouraging to see an increasing interest in self employment, and rewarding to help students, such as Chris, to realise their potential."

For more information on the SIE New Ideas & New Ventures Competitions visit www.sie.ac.uk, and join the online community to keep updated with all SIE activity at: www.sie.ac.uk/mysie.