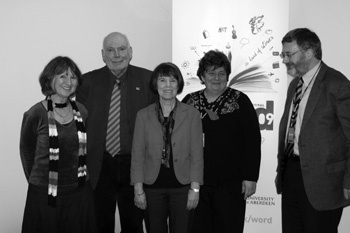 As the dust settles on another successful Word weekend, the winners from the festival’s short story competitions have been announced.

Eleanor Fordyce from Forfar landed the Toulmin Prize and a £500 cheque for her winning entry "Sae Mony Summers",a story exploring a childhood friendship bound up with a family secret.

The competition was set up by the University of Aberdeen's Elphinstone Institute to commemorate the work of John Reid*, otherwise known as David Toulmin – one of the North-east's finest exponents of written Doric.

Eleanor, a retired English teacher,will have her successful story published in the Leopard Magazine later this month.

Dr Ian Russell, Director of the Elphinstone Institute, said: "We are proud to have been able to honour John and his work in this way and delighted to see Eleanor take the inaugural Toulmin Prize. We received some very strong entries but Eleanor's tale really stood out and was a very worthy winner."

A younger generation of wordsmiths were also recognised during the Word Festival.

Scores of talented youngsters from the City and Shire entered the What's the Story? competition run by Wordfirsts – a publishing partnership between the Word Festival and Aberdeen City Council's Arts Education Team.

The 12 winners, who were asked to submit entries under the theme of On Display, will have their stories collated in a new book.

Meanwhile, St Margeret's School for Girls pupil Liesl Rowe (15) had her story, Jailbird, chosen from scores of entries to be published in the Times Educational Supplement Scotland (TESS), the competition sponsor.

Annette Murray, Aberdeen City Arts Education Co-ordinator, said: "We were really thrilled with the number of entries we had this year from schools across the Shire as well as City.

"The end result was yet another excellent batch of stories that were variously funny, dark and thought-provoking. The standard just keeps getting better and better each year."

Around 11, 000 people attended Word 09 readings, concerts, art exhibitions, theatre shows, and film screenings in the grounds of the University of Aberdeen and at venues across the Granite City from May 15-17.

*John Reid (1913-1998) was an Aberdeenshire farm labourer who spent most of his life working long hours for very small rewards. In odd moments he jotted down short stories, character studies and bothy tales. Eventually, as David Toulmin, he had a few articles printed in local newspapers. The first of his ten books was published when he was 59-years-old. They consist mostly of short stories and reminiscences, although his one novel, Blown Seed, paints a harsh picture of farm life.