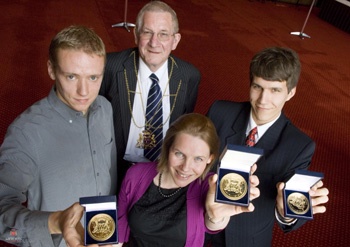 A mother who gave birth to two children during her studies was one of three University of Aberdeen students to be honoured by the institution yesterday (Tuesday 19 May) for their outstanding academic and personal achievements.

Ailsa Snaith, Ruairidh Falconer and Piotr Andruszkiewicz are this year's winners of the Aberdeen Quincentenary Prize – an annual award established to mark the University's 500th anniversary, which recognises the exceptional efforts and talents of students.

Lord Provost of Aberdeen Peter Stephen presented each of the successful students with a medal and a £1000 cash prize at an awards ceremony held at the Aberdeen City Council Town House.

To become eligible for the Quincentenary Prize, students are nominated by their Heads of Schools within the University.

Three prizes are awarded annually to students studying in the Humanities including Arts, Social Sciences, Divinity, Education and Law; in Sciences, including Engineering and Medicine; and a third prize which is awarded at the discretion of the University.

Thirty four year old, Ailsa Snaith is in her final year, studying for a degree in Medicine.

She gave birth to her second child Elinor just eight weeks ago, and had her first child Caitlin – now three – only weeks after completing her second year at the University.

During her studies Ailsa, who is originally from Snowdonia, also married her husband Chris – a Royal Air Force officer who lives and works in London.

After six years living in separate locations due to their work and academic commitments, Ailsa will join her husband in Oxford where she will take up her first post as a Doctor, following her graduation in July.

A final year student in Anthropology, 22 year old Ruairidh Falconer is originally from London but grew up in Glasgow.  He has been awarded the Quincentenary award in recognition of his consistently strong academic achievements and mature approach to his studies.

Ruairidh took a break from his studies after his second year to travel and worked with a non-governmental organisation in Guatemala.  This experience saw him develop a keen interest in language.  Following his graduation in summer, Ruairidh plans to travel to Beirut to study Arabic.

In his third year studying for a degree in Computing Science, 21 year old Piotr Andruszkiewicz is originally from Suwalki in Poland.

One in a number of academic accolades achieved during his studies, Piotr's application to his academic work, alongside his involvement in extra-curricular activity to enhance his studies, secured him the Quincentenary Award.