Her Majesty the Queen: A farewell from Scotland
12 September 2022 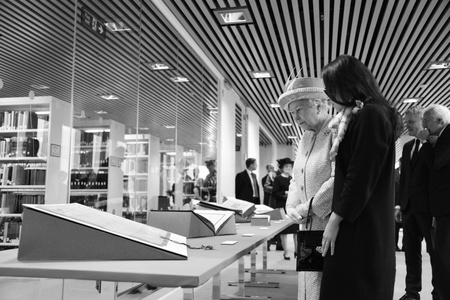 A special service celebrating the life of Her Majesty the Queen and her connection to Scotland took place this afternoon.

The King, accompanied by the Queen Consort – the University’s Chancellor –attended the ceremony ahead of receiving a motion of condolence at the Scottish Parliament.

The University has joined institutions from across Scotland in offering its deepest sympathy to the Royal Family and in sending its warmest wishes to King Charles III on his accession to the throne.

University Principal and Vice-Chancellor, Professor George Boyne, said: “We offer His Majesty King Charles our very best wishes. His Majesty has long made known his affection for this region and his dedication and commitment to education, enriching the lives of young people and considerable charitable endeavours align with the work of our University.

“We look forward to continuing our relationship with His Majesty and the Queen Consort, who has served as our Chancellor since 2013.”

A service celebrating the Queen’s life and her connection to Scotland took place at St Giles’ Cathedral where members of the public, friends, family members and representatives from the charities and organisations The Queen was affiliated to in Scotland gave thanks for her many years of dedicated service.

The musical tributes included an arrangement of Psalm 118 in Gaelic by the University’s Professor Paul Mealor performed by renowned singer Karen Matheson OBE.

‘I Shall Not Die, but Live' sets the words of the Psalm to the tune of Bays of Harris, for voice and harp.

Professor Mealor said he was deeply honoured to be able to write a last tribute to Her Majesty.

“I hope this is a fitting tribute from the Scotland that she loved so much,” he added.