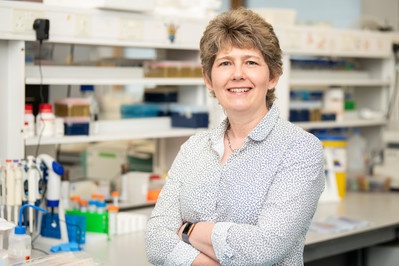 Scottish scientists at the UK's largest breast cancer tissue bank are celebrating the remarkable advances it has enabled in breast cancer research during its first decade.

Today, it sits across four dedicated sites including the Aberdeen Cancer Centre at the University of Aberdeen, which serves as the Tissue Bank’s Scottish hub.

Researchers from across the globe can apply to access samples and The Breast Cancer Now Tissue Bank has supported research teams in 12 countries, including the UK, Taiwan, USA, Italy, Finland, Sweden, South Korea, Portugal, Norway, Spain, Switzerland and Germany.

Professor Valerie Speirs, Co-principal Investigator of the Breast Cancer Now Tissue Bank and Chair in Molecular Oncology at the University of Aberdeen, said: “It’s been an honour to have been involved with the Tissue Bank since its inception and to see how it has evolved into the fantastic resource it is now. This has been made possible by the fact that everyone involved with the Tissue Bank is an active researcher, so we know and understand the research landscape.

“This means we have been able to adapt and evolve over the last 10 years to meet the need of researchers and we will continue to do this to make outcomes for breast cancer patients the very best they can be.”

The Tissue Bank was founded in 2010 following a wide-scale review by leading scientists, who told the charity that the greatest challenges faced by breast cancer research was the lack of access to high-quality tissue to study and better understand the disease. Breast Cancer Now was determined to solve this and in 2012, the Tissue Bank was formally opened to researchers.

Together with sites in London, Norwich and Sheffield, the University of Aberdeen has contributed to collecting samples from nearly 10,000 patients, bringing the Tissue Bank’s total collection to 126,000 samples.

...we have been able to adapt and evolve over the last 10 years to meet the need of researchers and we will continue to do this to make outcomes for breast cancer patients the very best they can be." Professor Valerie Speirs

Of the 12,000 samples allocated to research, some of the key findings include:

Brenda Barnett, 64, from Aberdeen was diagnosed with stage 2 invasive ductal carcinoma plus DCIS in January 2020 and was asked to donate tissue samples to research following her lumpectomy surgery. Brenda said: “I was a grandmother of four when I was diagnosed with breast cancer, and thanks to research I lived to see the birth of my fifth grandchild. Getting a breast cancer diagnosis is life-changing, but I was lucky. They caught my cancer early and treated it quickly so now I have the privilege of watching all five grandchildren grow up together.

“That’s why choosing to donate my tissue samples for research was a no-brainer, even when I didn’t know what was going to happen to me. If it could help other people in the future, it was worth it.

“The work they do at the Breast Cancer Now Tissue Bank is vital and will change lives for generations to come. I’m proud to say I’ve contributed to future discoveries in some small way.”

Sue Stannard, 69, from Caythorpe, Lincolnshire was diagnosed with oestrogen positive and HER2 positive breast cancer in 2011 and became one of the first people to donate to the Tissue Bank following mastectomy surgery. She said: “I remember I was sitting in these disposable hospital knickers and gown with black ink all over my chest from the surgeon’s preparations for my mastectomy and a white beanie hat covering my bald head - a fairly low point for me emotionally. A woman then came in with some forms and spoke to me about the hospital collecting tissue for breast cancer research. I don't recall what she said other than asking if it was something I would be willing to consent to, but I didn’t have to give it a second thought.

“I signed a form and that was it. I didn’t know at the time it was a new tissue bank, but I understood the importance of research. Every little step is so significant. If having real human tissue can help speed up the development of other new treatments then there’s really no decision to make - it’s so obviously a positive thing to do and it’s not as if I needed the tissue for anything else!

“Having treatment options is everything when you’re going through breast cancer. If I am unlucky and it does come back, I will rely on having those options again, and I know that’s only possible through research.”