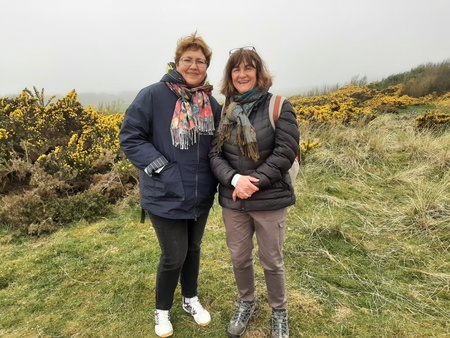 An academic whose work focuses on the historic ties between Poland and Ukraine is drawing on modern day connections between the two countries to settle into Aberdeen after fleeing the ongoing war in her homeland.

Dr Natalia Gromakova has joined the University of Aberdeen’s history department as part of the ‘Scholars at Risk’ programme for Ukraine.

She is one of seven recipients of a fellowship from the Royal History Society and academic partner organisations to take up a position in a UK or European university, with the host university matching the contributions for the scholarship.

Dr Gromakova specialises in the social and associational life of Polish society in the nineteenth-century Ukrainian lands occupied by Austria and Russia after the Third Partition of Poland in 1795 up to the First World War.

She fled her home in Bucha, around 20km north-west of Kyiv, with her daughter on March 11. The commuter town had become a key battleground as the Russian onslaught towards the capital began, with many civilians losing their lives in the brutal assault and occupation which followed.

Dr Gromakova had been working at the National Pedagogical University in Kyiv as a postdoctoral researcher. She and daughter Olena were able to evacuate the town, which had been under relentless shelling since the outbreak of war, but her husband remained behind to support those defending the country.

After initially staying near Hannover in Germany, Dr Gromakova sent her CV to the Ludwig Maximilians University in Munich which has a strong Department of East European History.

The Department in Munich put her in contact with the University of Aberdeen’s Professor Karin Friedrich who ispart of the University’s Centre for Polish-Lithuanian Studies and has been, through her academic networks, trying to support refugee scholars from Ukraine.

Dr Gromakova said: “Professor Friedrich noted that my research aligns closely to the work of the Centre and encouraged me to apply for the Fellowship, which is matched by the host institution.

“I was delighted to be selected and to have the opportunity to come to Aberdeen. It has long been a dream of mine to study and work in Scotland, although the circumstances are not those I’d have chosen.

“I have enjoyed great support from the University, and I think the Centre and facilities here will really help me to advance my research. Additionally, collaboration with the German Historical Society provides an opportunity to expand my research perspective to clarify the features of intercultural communication in the context of nation-building during the 19th century.”

The unexpected nature of the move meant that Dr Gromakova did not have an opportunity to develop her English language skills to the extent that she’d have wished ahead of her posting but she is quickly making up for lost time and is drawing on other international connections within the city to support her development.

“Karin has been wonderful in helping me not only with the academic side but with paperwork, contacts and official documents,” she added.

“When I haven’t had enough English to understand, we’ve managed to communicate in Polish which has been a real help!

“The connections with the Polish community in Aberdeen have also made it much easier to integrate. There is a real feeling of solidarity with Ukraine here and that has made me feel very welcome.

“I am looking forward to the time I will be able to return home, but this is a very good opportunity for me to develop my academic research within a Centre where my focus on the history of western Ukraine complements the work of other Aberdeen academics.”

Professors Robert Frost and Karin Friedrich said: “We are delighted to welcome Natalia to Aberdeen so that she can continue her research work in safety. She will be an asset to the work of the Centre and is already preparing a paper for a future seminar series.”