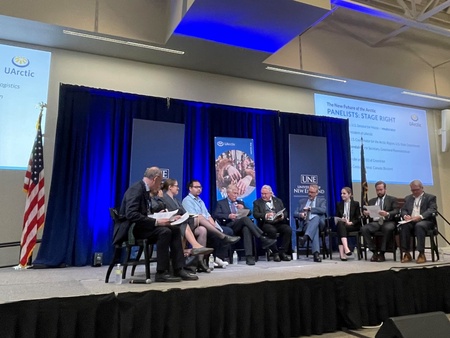 Aberdeen academics were in Portland, Maine, last week to share their thoughts on science diplomacy and the post-carbon future as the 2022 UArctic Assembly got underway.

Gisele M Arruda, senior lecturer in the Business School, and David G. Anderson, Chair in Anthropology of the North at the School of Social Science, attended the event which was hosted by a consortium of New England education institutions.

The University of Aberdeen joined the UArctic in 2013 and is considered to be one of the leaders of Arctic science in Scotland. The 2022 event was focused on geopolitics and the difficulties created by the invasion of Ukraine by the Russian Federation. Important discussions revolved around the issue of science diplomacy, in particular the unique opportunity for the UArctic to continue speaking to Russian scientists during these times of trouble.

Professor Anderson raised the concern of the 'pausing' of the membership of Russian scientists in the institution suggesting that they be allowed to continue to participate as individual scholars. There was also a high-level panel on 'The New Future of the Arctic' moderated by Maine Senator Angus S King Jr. The panel was composed of representatives of indigenous societies and ambassadors and state department representatives from a number of circumpolar Nations.

One of the speakers was University of Aberdeen alumnus Karla Williamson. A central point of discussion was the transition to a post-carbon future which sits on the shoulders of Arctic indigenous peoples who are being asked to host the mining of rare minerals for electric vehicles and batteries.

Professor Arruda proposed the global institutionalisation/legalisation of the SDGs as a compulsory legal criteria to operate businesses, management, supply chains and education.

Professor Killerud, the UArctic president, drew upon his own background as a geologist to speak about redesigning mineral extraction along the model of small, sustainable Arctic mines designed to provide employment for generations instead of one or two decades.

A significant event at the meeting was the unanimous approval of a thematic network on Island Studies led by the University of the Highlands and Islands as well as another network in Arctic Design with significant participation of Scottish Universities. At this meeting the Assembly approved the application of the University of Edinburgh to join the organisation.

The format of the meeting then pivoted around a circle designed by indigenous youth delegates from across North American and Europe. The four-day meeting culminating in disrupting the linear layout of the assembly to create an enormous circle of chairs where each young Indigenous delegate shared their ideas with the Assembly. Professor Arruda actively participated with her knowledge of sustainable development and ethical practice within the sciences.

The next UArctic Assembly will be in Quebec City with a special emphasis on the work of the First Nations peoples of Quebec.