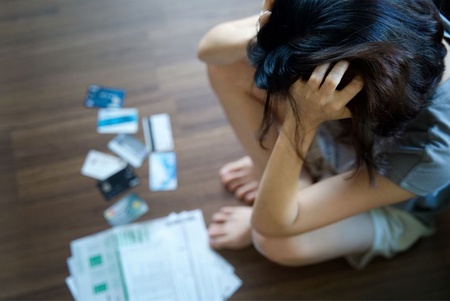 Mental health is a key factor in people's ability to manage their personal debt by following debt advice, according to newly published research.

With millions bracing themselves for financial pain and increased debt as the cost of living crisis deepens, and one in four people in the UK now experiencing mental health issues, research examining the impact of mental health on debt advice adherence has been carried out for the first time.

The study, which has recently been published in the International Journal of Social Psychiatry, was led by researchers at the University of Aberdeen Business School and Queen’s University Belfast.

It investigated the relationship between mental health and decisions to follow debt advice in individuals applying for a formal debt resolution mechanism, such as an Individual Voluntary Arrangement (IVA), the equivalent of a Trust Deed in Scotland.

A total of 86 participants completed a survey measuring their mental health, recall of information discussed during debt advice appointments, attitudes towards IVAs and the level of trust in the advisors.

Their adherence to the guidance given was measured 10 weeks later. Researchers found that participants who suffered from worse mental health were less likely to have followed the advice they had received than those with better mental health.

“The strong association which is known to exist between indebtedness and mental health is most often considered from the perspective of indebtedness leading to poor mental health,” said Dr Nicole Andelic, Research Fellow at the University of Aberdeen and co-author of the report.

“By working with a financial organisation we were given a rare opportunity to study individuals seeking debt advice who were told they were eligible to apply for a structured repayment plan that would run for five years before their remaining debt was written off.

“What it showed us was that although debt may lead to worse mental health, poor mental health also correlates with difficulties escaping from problem debt. In fact, we know that these participants had poor mental health prior to deciding not to take the advice offered to them, rather than as a result of not following this particular piece of advice.

This means that the people who need the advice most may be the least likely to follow it. As a result, mental health needs to be taken into consideration when advising people with debt problems." Dr Nicole Andelic, Research Fellow at the University of Aberdeen

“Indeed our study also suggests that people with very severe debt problems have substantially poorer mental health than the general population, regardless of whether they adhere to debt advice or not.

“This means that the people who need the advice most may be the least likely to follow it. As a result, mental health needs to be taken into consideration when advising people with debt problems.”

Professor Feeney said: “There is a lot of stigma around problem debt even though many people experience problem debt through no fault of their own. Unfortunately, the experiences of people with problem debts have not received enough attention from researchers or from policy makers.

“The important contribution of our study is to identify how a particularly important financial decision about whether to enter a formal debt resolution mechanism is associated with poor mental health. Our results suggest that having poor mental health may make it harder to escape from the misery caused by problematic levels of debt.

“Given that being in debt is itself likely to cause poor mental health, the current financial climate may result in thousands of people being caught in a cruel indebtedness trap where the mental ill health caused by their indebtedness renders it difficult for them to make good financial decisions about how to work their way back to financial health.

“As well as advice on the mechanisms available to them, people with problem debts need support as they make very difficult decisions between the available options.”

The research was funded by the Business Alliance Office at Queen’s University Belfast, an independent insolvency practitioner and the Economic and Social Research Council (ESRC).