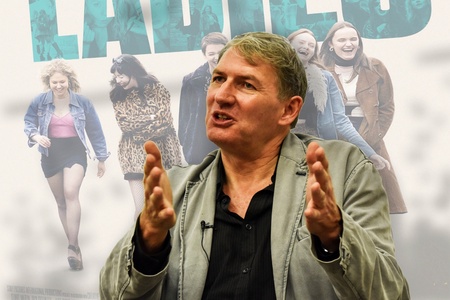 The film adaptation of a successful novel by Aberdeen lecturer Alan Warner will hit UK cinema screens on Friday.

Our Ladies follows the teenage choirgirls of Our Lady of Perpetual Succour on a day trip from their port town in the Highlands to a singing competition in Edinburgh. Its focus is the rebellious gang sitting at the back of the bus, who are less interested in the contest than furthering their own version of a catholic education in the big city.

It is based on the 1998 novel, The Sopranos, written by Warner - a Senior Lecturer in Creative Writing who has taught at the University since 2019.

He said seeing his work on general cinema release following Covid delays will be a special moment.

“I consider myself very lucky to have experienced my novel, The Sopranos, being turned into the Sony/Columbia cinema release Our Ladies,” he said.

“It’s taken a while to get used to hearing the new title but the change was necessary to avoid confusion with TV series The Sopranos – not something I had to worry about when writing it 20 years ago!”

Warner will draw directly on the experience to teach the course The Art of the Screenplay, in the second half session, looking at the mechanics of this adaptation of Our Ladies.

And while elements of Our Ladies may differ from the way Warner envisaged his characters writing the book two decades ago, he is delighted with the quality of the production.

“Credit needs to go to the film’s Scottish director, Michael Caton Jones – who has made so many fine movies,” he adds.

“Michael stuck to his plan of what he wanted to do, and with producer Laura Viederman, they finally made it happen. Alan Sharp, the great Scottish novelist and screenplay writer, worked on an early version of the adaptation – I wish he was still with us.

“Most of all though, I hope audiences will appreciate the fantastic, youthful cast – wonderful, talented actors and great spirits; I hope the film assists their budding careers.

“These have been difficult times, so I hope this wee story of seizing a single day, brings a smile.”

Professor Chris Collins, Head of the School of Language, Literature, Music and Visual Culture at the University says seeing the novel brought to life on screen will be like ‘reencountering old friends’.

“I picked up Alan’s book The Sopranos in a bookshop long before either of us joined the University,” he added.

“I was completely transfixed by the totally immersive way in which it inhabits the world of these young women. I read it in a day, living their desires, their fears, their friendships and their quarrels, and laughing out loud many times over! I’m very much looking forward to seeing the big screen version at long last – it will be like reencountering old friends.

“We’re very fortunate to have a Creative Writing team of the highest calibre here at Aberdeen, and I know that our students benefit enormously from Alan’s teaching, built on his experience as one of Scotland’s leading novelists.”