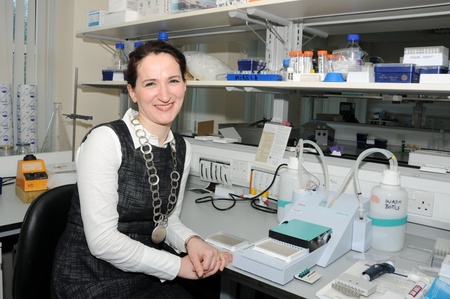 The University of Aberdeen will join forces with Scotland's other top Diabetes research institutes to celebrate the 100th anniversary of the discovery of insulin.

Aberdeen graduate and later Regius professor, JJR MacLeod, led the Toronto team which made the landmark breakthrough in the treatment of diabetes a century ago.

Today the University continues to pioneer diabetes research to improve the lives of those with the condition.

Aberdeen will join Diabetes Scotland and the universities of Dundee, Edinburgh, Glasgow and Strathclyde to put on a programme of online events to showcase the role that Scotland has played not only in the initial insulin breakthrough, but in many other medical achievements which have supported diabetes care in the decades since insulin was first successfully administered.

The events, which will run from October this year to February 2022, will feature leading experts as well as patients living with diabetes.

Professor Mirela Delibegovic, the Director of Aberdeen Cardiovascular and Diabetes Centre, leads a research team at the University of Aberdeen examining causes of insulin resistance, how it can lead to type 2 diabetes and cardiovascular disease and her lab works on different nutritional and pharmacological approaches to reverse or postpone these conditions.

Clinical and laboratory researchers within the Centre also aim to ensure that the research has a direct impact on patient lives through reduced risks, improved treatments, diagnosis, communication and education.

Professor Delibegovic said: “Working at the University of Aberdeen, I am aware that I am following in the great footsteps of JJR Macleod.

“The breakthrough pioneered by his Toronto team transformed Type One diabetes patients lives from an almost certain death sentence to a manageable condition.”

“It is one of the most significant milestones in the history of medical science and it is important that we celebrate it and share the, sometimes complicated, story of how this former Aberdeen student came to lead this discovery.

“But for the centenary it is important that we look to the future as well as the past and this is an ideal opportunity to share with the diabetes community and wider public details of the important work underway in Scottish universities today, which we hope will further improve the lives of those living with diabetes in the future.”

Angela Mitchell, National Director of Diabetes Scotland said: “I am delighted to announce our collaboration with researchers from Scotland’s top universities to present this series of on-line events that celebrate life -saving discoveries like insulin and help us on our journey to a world where diabetes can do no harm.

“The discovery of insulin 100 years ago is still having a life changing effect on people with diabetes today. Scotland has played, and still plays, a central role in the development of insulin and how it is used.

“Marking milestones like this is a precious moment where we can both reflect on the change that has happened and talk about the change that still needs to happen. These events are a vehicle for that and I look forward to seeing them.”

Co-ordinator of the events, Professor Callum Sutherland from the University of Dundee said: “I am looking forward to working with Diabetes Scotland to tell the story of 100 years of research into Diabetes, what is happening in Scotland’s world famous Research Institutes right now and importantly what we still need to do to achieve our shared goals of reducing the number, and to improve the lives, of people living with diabetes.”

The first event Insulin: A matter of life and death will be held on October 8 and can be booked at www.eventbrite.co.uk/e/insulin-a-matter-of-life-and-death-tickets-165737067029

The presentations will be Webinars using Zoom and are free-of-charge.

Details of how to sign up can be found here