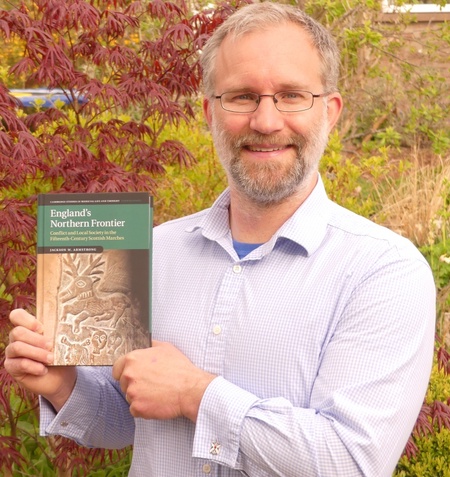 A book by a University of Aberdeen historian has been named as the joint winner of the 2021 Whitfield Prize.

Run by the Royal Historical Society, the award celebrates the best in historical writing from authors publishing in their sole name for the first time.

Dr Jackson Armstrong has shared the 2021 prize for his first monograph, England’s Northern Frontier: Conflict and Local Society in the Fifteenth-century Scottish Marches.

The Prize was awarded to Dr Armstrong together with Dr Lauren Working, author of The Making of an Imperial Polity: Civility and America in the Jacobean Metropolis

Dr Armstrong is a Senior Lecturer in History at Aberdeen and has published widely on medieval and renaissance English and Scottish history.

He said he was delighted to see his work recognised through the award, which has been running since 1976 at the bequest of Professor Archibald Stenton Whitfield.

“I’m so thrilled to be named as joint winner of this award. I’m grateful to all who have helped along the way in making the book, and to the RHS for this wonderful recognition. Warm congratulations to my co-winner, Lauren, and to all the shortlisted authors, on this success.”

It considers the effects of war on the region and how landowners and peasants managed conflict, drawing on international comparisons to provide a wider European context.

The judges commented: In this deeply researched and reflective volume, Jackson W. Armstrong has supplied the first book-length study of England’s far north in the fifteenth century: that, alone, is a major achievement. But by applying a sophisticated approach to frontiers, the book also reconsiders the idea of ‘north’ and its supposed lawlessness, breaking new ground in challenging received ideas that marcher society in this period was that of an exceptional—and exceptionally violent—‘marginal’ border region.

Using an impressive repertoire of approaches, and a wide range of published and archival sources, Armstrong shows that the Scottish marches were well integrated with the rest of the realm of England so far as governance was concerned. The culture of conflict that prevailed was less a function of the borderland context and more an expression of feud, which—as elsewhere in Europe at this time—may have been indigenous to late-medieval England.

You can hear Dr Armstrong talk in more depth about his work and the contribution it makes to our understanding of the history of this region here.

Details of all the 2021 RHS Awards for publication, research and teaching may be found here.