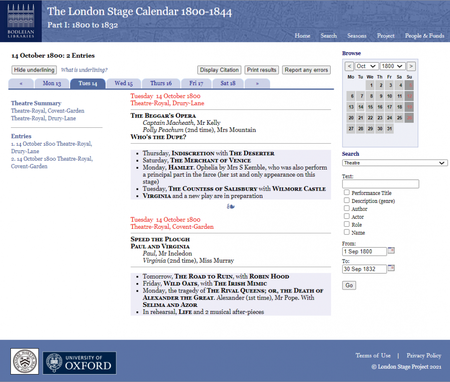 The London Stage, 1800-1844 is an open access digital resource detailing thousands of theatrical and musical performances.

Jo Hicks (Aberdeen) is co-director with Michael Burden (Oxford) of the London Stage Project. At the heart of the project is the London Stage Calendar 1800-1844 of which Part I: 1800 to 1832 was released on 17 April 2021. An electronic calendar of performances, it is designed to expand the range of the existing London Stage 1660-1800, now available online at https://londonstagedatabase.uoregon.edu/. For over 40 years this scholarly work has aided and stimulated research into the drama, staging, management and politics of the 18th-century London theatre. The success of this tool, however, has caused a cut-off point in published scholarship, with many studies ending — as does the calendar — in 1800.

The London Stage 1800-1844 is designed also to respond to changes in research priorities since the old London Stage was conceived by including popular or 'illegitimate' performance venues as well as better known 'west-end' houses.

Our priority has been the construction of a calendar of performances, and in doing so, we have focussed on a single source — The Times — rather than producing conflated entries. This bibliographical underpinning has survived the various strains put on it in practice, and there are only a few entries, clearly acknowledged, where daily information has been supplied from elsewhere.

There is no doubt there is more — much, much more — to be learned about these performances; and we hope the calendar will provide that impetus. As with all such projects, it has taken much longer than we intended, but at the heart of this struggle for time and funds, has been the desire to keep the calendar an open resource. Our funders have our heartfelt thanks for their support.

For more details, and to search the open access calendar, visit https://londonstage.bodleian.ox.ac.uk/