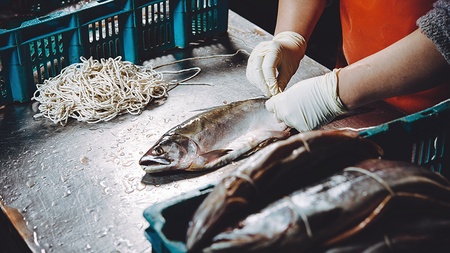 Researchers have found new evidence that global warming is affecting the size of commercial fish species, documenting for the first time that juvenile fish are getting bigger, as well as confirming that adult fish are getting smaller as sea temperatures rise.

The findings are published in the British Ecological Society’s Journal of Applied Ecology.

The researchers from the University of Aberdeen looked at four of the most important commercial fish species in the North Sea and the West of Scotland: cod, haddock, whiting and saithe. They found that juvenile fish in the North Sea and on the West of Scotland have been getting bigger while adult fish have been getting smaller. These changes in body size correlated with rising sea temperatures in both regions.

Idongesit Ikpewe, lead author of the study, said: “Both the changes in juvenile and adult size coincided with increasing sea temperature. Importantly, we observed this pattern in both the North Sea, which has warmed rapidly, and the west of Scotland, which has only experienced moderate warming. These findings suggest that even a moderate rise in sea temperature may have an impact on commercial fish species’ body sizes.”

In the short term, the findings may mean a reduction in commercial fishery yields, impacting an industry worth around £1.4 billion to the UK economy and one that employs over twenty-four thousand people, according to records from the House of Commons research library.

Idongesit Ikpewe said “Our findings have crucial and immediate implications for the fisheries sector. The decrease in adult body size is likely to reduce commercial fisheries yields. However, in the long-term, the faster growing and larger juveniles may compensate, to some extent, for the latter yield loss, as although the increase in length (and, therefore, weight) per individual may be small, younger fish are far more numerous. It is this trade-off that we now need to investigate.”

To mitigate global warming effects and maximise sustainable yields, the authors say that temperature changes should be factored into forecasts used in fishery management.

These findings suggest that even a moderate rise in sea temperature may have an impact on commercial fish species' body sizes." Idongesit Ikpewe

The findings are also likely to impact marine ecosystems. “Of the four species we looked at, three (cod, whiting and saithe) are fish eating predators towards the top end of the food chain and therefore have an important ecological role in the ecosystems they inhabit. Since predator size dictates what prey they can target, a change in the body size of these fish species may have implications or predator-prey relationships, with potential consequences on the structure of the food web.” said Idongesit Ikpewe.

The maximum body size fish can reach is determined by the supply and demand of limiting resources like oxygen. Warmer water typically contains less oxygen but also increases metabolic rates and therefore demand for oxygen. Fish in warming waters may sooner reach the size where they can no longer acquire the oxygen needed for maintaining metabolic demands, thereby limiting adult body size.

It’s previously been shown in laboratory experiments that ectotherms (cold-blooded animals) develop faster at warmer temperatures but reach a smaller body size. This phenomenon, termed the ‘temperature size rule’, has been observed in several different animals, plants and bacteria. However, until now, few empirical studies have shown a link between increased temperature and faster growth in fish.

In this study the researchers examined the body size of cod, haddock, whiting and saithe at different age groups and compared trends in juvenile length and adult length with annual bottom sea temperatures.

They obtained the data from International Bottom Trawl Surveys provided by the International Council for the Exploration of the Sea. This provided 30 years of fishery-independent bottom trawl data from 1970 to 2017 for the North Sea and 1986 to 2016 for the West of Scotland.

Although the findings provide strong empirical evidence for changes in fish size and growth rate in warming seas, the study was limited to demersal species (living close to the seabed) in areas around the UK. Other commercially important species to the UK such as mackerel and herring were not considered in this study.

“The next stage of our work is to consider the management implications based on modelling these populations.” said Idongesit Ikpewe. “The idea is to work out what the size changes we observed may mean for future fish productivity and yield under different scenarios of warming”.