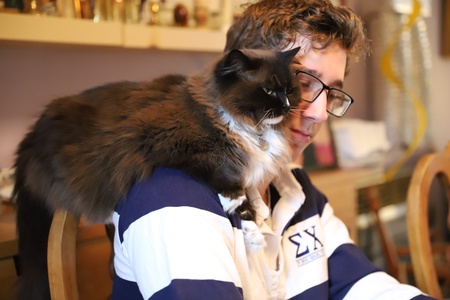 Aberdeen student and avid hackathon competitor Rufus Behr has scooped one of the top prizes in an international programming competition organised by some of the US' leading universities.

Rufus (20), who is in his second year studying Computing Science and Mathematics, won the Best Implementation and Growth category in IvyHacks, which was co-hosted by six of the Ivy League Hackathons, a programme of competitions organised by Brown, Columbia, Cornell, Dartmouth, Harvard, and Princeton universities.

Hackathons usually span 24 to 72 hours, with minimal sleep for competitors. Due to COVID-19, the organisers of IvyHacks could not host individual hackathons in-person, and so they worked together to host one large event with 677 competing teams.

Rufus explained: “The principle of hackathons is that you come up with an idea, either by yourself or with a group, and you then develop the idea into some kind of Proof of Concept.

“As a competitive chess player, an element of my training plan is to play blindfold against chess computers of varying difficulty. Part of the problem is that computers inherently don’t play the same way that humans do, so even a ‘bad computer’ will play a series of perfect moves, play an obviously bad move, then continue to play more perfect moves.

“My idea – “Copy Chess” - originated when I heard top chess players alluding to the fact that they think Chess is somewhat similar to a language. As someone who works with Natural Language Processing (NLP) for a job, it occurred to me I might be able to create a programme that could identify the playstyle of a particular chess player and simulate it - this way I could potentially identify the playstyle of certain competitors that I tend to lose to and train against them.”

Originally from Yonkers in New York, Rufus moved to Aberdeen with his family when his father, The Very Reverend Dr John Behr, took up post as Regius Professor of Humanity at the University of Aberdeen.

“I was surprised to have won - I thought my project would be too niche,” he said. “My prize was a JBL Flip 5 speaker but, more importantly, entering and competing at these hackathons puts me in good stead with companies which sponsor these competitions largely as an opportunity to recruit talented and competitive individuals.”

Rufus’ work and the other projects and winners can be viewed at https://ivyhacks.devpost.com/project-gallery.