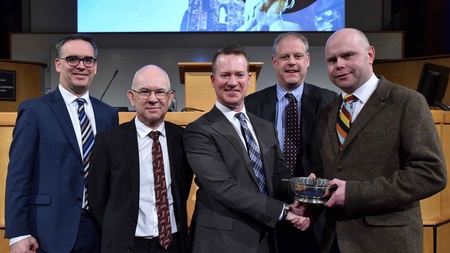 An RAF Regiment Flight Sergeant has been awarded the prestigious University of Aberdeen leadership award.

James Stoddart, a Flight Sergeant with 2622 (Highland) Squadron based at RAF Lossiemouth was presented with the award during a high-profile leadership event at King's College last month.

Dr Johnston is a former NATO task force commander, former assistant professor at West Point and now is a fellow at the John F. Kennedy School of Government at Harvard University.

The award comes after James was nominated by his fellow students and approved by leadership staff at the university.

To be put forward for the award was a great honour and I would like to thank the staff and my fellow students for their support throughout the course." James Stoddart

Flight Sergeant Stoddart’s studies so far with University of Aberdeen have looked at leadership theory, improvement methodology as well as work-based evaluation of recruitment and retention strategies and coaching in the workplace.

He will progress on to the final dissertation stage of his Masters studies next year.

James said: “Being part of the MSc Leadership in Professional Contexts programme has been a great experience. I have developed as a leader throughout, by learning from fellow students and their experiences. To be put forward for the award was a great honour and I would like to thank the staff and my fellow students for their support throughout the course.”

Leadership Programme Director Neil McLennan added: "Our leaders work hard both in their working roles but also on evaluating their work and enhancing their practice through sustained professional development.  An important part of their work includes celebrating others success.  It is important we have the chance to celebrate the success of one of our leaders.

“Flight Sergeant Stoddart deserves every credit for his work with the RAF Regiment and it was fitting that Dr Johnston was able to present the award tonight after a lecture on ‘the Future of Defence."

More details of Leadership courses at University of Aberdeen can be found here.