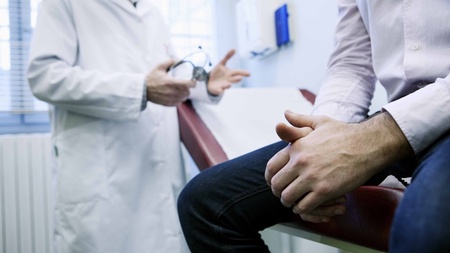 A new treatment for advanced prostate cancer being developed by a scientist at the University of Aberdeen has received a major new funding award.

The award of almost £1.1 million from the Medical Research Council (MRC) a Biomedical Catalyst: Developmental Pathway Funding Scheme (DPFS) is a first for Aberdeen.

Prostate cancer is the most common cancer in UK men with almost 50,000 new cases a year. It is estimated that by 2035 prostate cancer could kill 50 men a day.

Many men with prostate cancer receive hormone treatment, which works by stopping male hormones like testosterone feeding the cancer. This has been the mainstay treatment for the last 75 years

Achieving this highly completive funding support from the MRC is a real boast to our research and was a real team effort." Professor Iain McEwan

The project is in partnership with medicinal chemists led by Dr Craig Jamieson (University of Strathclyde) and collaboration with colleagues at Erasmus Medical Centre, Rotterdam.

The team aim to develop novel small molecules that will switch off both normal and aberrant forms of the androgen receptor protein inside prostate cancer cells.

Professor Iain McEwan said: “Achieving this highly completive funding support from the MRC is a real boast to our research and was a real team effort, involving the close collaboration of researchers here in Aberdeen and Glasgow as well as Dr Ann Lewendon and colleagues in Research and Innovation.”