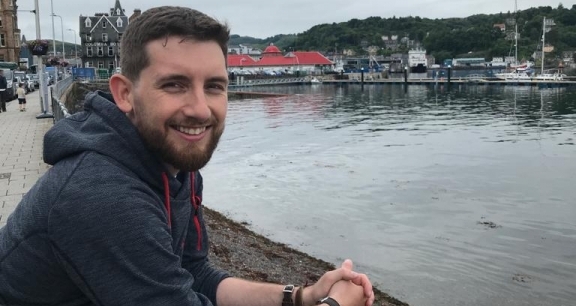 Graduating this week with an MSc in Teaching English to Speakers of Other Languages (TESOL), Chris Knight is celebrating not only his achievement, but also the last 10 years studying and working at the University of Aberdeen.

In 2009, Chris embarked on his undergraduate studies in History before joining the University as a member of staff in 2014. In 2016, he joined the School of Language, Literature, Music and Visual Culture as the School Secretary, before taking a year out to complete his MSc. Having spent most of his adult life at the University, Chris felt it would be a natural progression to further his studies here.

Chris said: “I had always been drawn to teaching English abroad, but with other commitments taking priority I decided to look for professional development opportunities that were a little closer to home. After talking to my colleagues in the Linguistics department, I was assured the TESOL programme was appropriate for anyone regardless of their previous teaching background, and from then on I was keen to continue my studies.”

Chris’s experience of being both a student and member of staff at the University led to him being elected as Class Rep, as he broadened his international horizons.

“As Class Rep I was often the first port of call for my classmates if they had an issue. I think they appreciated having someone on the course who had knowledge of what goes on behind the scenes but could also see things from a student’s perspective.

“Having the opportunity to study with a large contingent of international students was also a very positive experience. As one of only three UK students in a class of more than twenty, it was a great opportunity to gain insight into international cultures and perspectives that I may not have previously considered. Being able to try traditional Chinese hotpot cooked by my classmates was a particular highlight!”

Despite some personal struggles in the past, Chris is proud to have been awarded a distinction in his dissertation, which he’ll be celebrating at Thursday’s ceremony with his family.

“This was a very personal achievement for me due to struggling with mental health issues during my undergraduate studies. At the time I didn’t acknowledge the problem as I should have and would encourage anyone finding things difficult to seek help from friends, family and the University’s support services. Succeeding in my postgraduate degree has been my way of validating just how far I’ve come since then.”

As Chris looks to the future after graduation, he also reflects on the support that helped him to get to where he is today.

“I think particular recognition and thanks need to go to the English language teachers in the Language Centre who were very gracious with their time over the past year. Although they were extremely busy, my classmates and I were encouraged to sit in on their classes which was a great opportunity to engage with students in a teaching environment and was truly invaluable for our dissertation projects.

“I’m also looking forward to being able to spoil my family and friends who have supported me through my studies. This MSc means a great deal and I’m excited to find out where it may take me in the future.”