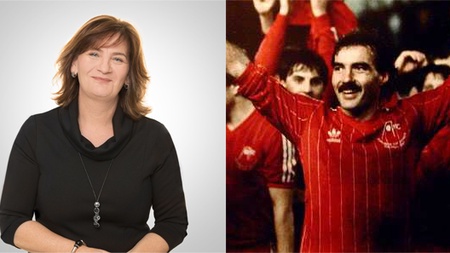 The captain of the last Scottish team to win a European football title and a distinguished oil and gas executive will be honoured by the University of Aberdeen this week.

There is no better time to be on our campus than during graduation week. It's a celebration of the hard work of our new graduates, of our excellent teaching staff who have helped them every step of the way, and it is also an opportunity to pay tribute to our new honorary degree recipients. " Professor George Boyne

Voted Aberdeen FC’s greatest player of all time, Willie Miller is an internationally renowned footballer who captained his country and led Aberdeen FC during its most successful period to date.

During a club-record 560 league appearances, he amassed 12 trophies including three league titles and led the club to its greatest honour – defeating Real Madrid to win the 1983 European Cup Winners Cup. On the international stage he represented Scotland 65 times, 11 times as captain, and played at the 1982 and 1986 FIFA World Cups.

Retiring as a result of injury in 1990, he became manager of Aberdeen FC in 1992, leading them to two consecutive second placed finishes and two cup finals.

In 2011, Willie, who lives with osteoarthritis, helped support the launch of a new experimental tissue engineering centre at the University which aimed to repair the joint damage caused by the condition.

Today, he remains a key figure in Scottish football as a commentator and analyst with BBC Scotland.

Her previous roles have included - first chair of the National College for Onshore Oil and Gas; Vice President of Centrica Energy’s Exploration and Production; Managing Director of Britannia Operator Limited; President of Caspian Region for ConocoPhillips during which time she was awarded a Jubilee Medal by the Prime Minister of Kazakhstan in recognition of her contribution to the country’s oil and gas industry. She has also served on the board of the Oil & Gas UK, the Technology Leadership Board, and the OGA Decommissioning Board.

In 2016 Colette was appointed Chief Executive Officer of the Oil & Gas Technology Centre. The Centre has the objective to help unlock the potential of the UK continental shelf, anchor the supply chain in the North-East Scotland, and create a bright future for the region as a thriving global technology hub.

The University of Aberdeen is partnered with the Oil & Gas Technology Centre on The National Decommissioning Centre – a global research centre that combines academic excellence and industry expertise to support decommissioning activity by accelerating new technologies that transform mature field management and decommissioning. The OGTC, under Collette’s leadership, will play a key role in the pathway towards a zero-carbon energy sector and the move to renewable energy sources and the National Decommissioning Centre will be an important resource in this process.

Professor George Boyne, Principal & Vice-Chancellor of the University of Aberdeen, said: “There is no better time to be on our campus than during graduation week. It’s a celebration of the hard work of our new graduates, of our excellent teaching staff who have helped them every step of the way, and it is also an opportunity to pay tribute to our new honorary degree recipients.