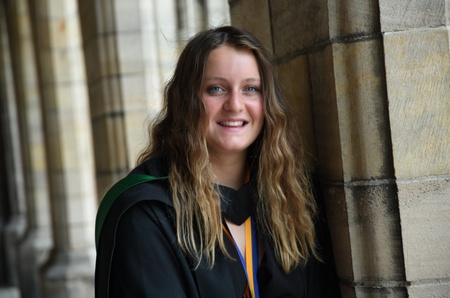 Taking to the waves helped Megan Mackay cope with the grief of losing her twin brother while studying towards her degree, and now she wants to help others who may be struggling themselves.

Megan, whose brother Ruairidh died in a tragic accident while she was in second year, has built up a reputation as one of Scotland’s best female surfers during her time at university.

A member of Aberdeen University Surf Club, Megan has a string of accolades under her belt.  Most notably, her winning performance at the Nordic Surf Games in Norway was described by the Scottish Surfing Federation described as ‘the highest accomplishment of any Scottish surfer ever at an international event’.

Having graduated this week with a degree in Petroleum and Petroleum Geology, Megan - who is from Macduff in the north-east of Scotland - is embarking on a career as a petrophysicist with oil and gas giant Schlumberger.

Surfing has helped me so much, not only in terms of dealing with the loss of my brother but in every aspect of my life" Megan Mackay

As well as continuing to compete in surf competitions at home and abroad, Megan plans to help others whose struggles might also be alleviated by taking to the waves.

“The main reason I was able to complete my degree was through surfing,” she explained.  “It really helped me at a difficult time, and what I’d really like to do is help people who have gone through traumatic events themselves, or who are struggling with mental health issues, using surf therapy.

“Surfing has helped me so much, not only in terms of dealing with the loss of my brother but in every aspect of my life.  It has made me a more confident person, and I’d like to show others how it can help them too.”