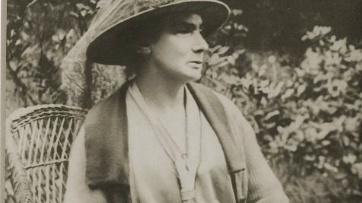 A North-east writer, whose poems written in the Doric are considered among the finest war poetry capturing the grief and loss of the Great War, will be commemorated at an event in Dufftown later today (Monday, May 27).

A plaque dedicated to Mary Symon will be unveiled at Dufftown Town Clock at 7pm, the last in a series installed across Scotland in recognition of Scotland’s war poets in a project spearheaded by University of Aberdeen academic, Neil McLennan.

The ceremony will be led by Lord Lieutenant of Banffshire Lady Clare Russell, who will unveil the plaque with children from Mortlach Primary School and Speyside High School.  Representatives of Dufftown and District Community Council, Douglas Ross MP and Richard Lochhead MSP will also be in attendance.

The trail of ‘war poets’ plaques have been unveiled as part of the Historical Environment Scotland Plaque Scheme, which has been running since 2012 to celebrate significant figures from Scotland’s history by erecting plaques on the buildings where they lived or worked.

Neil McLennan, a senior lecturer in Education, took inspiration for the project from his great-grandfather’s connection to Scottish war poet Ewart Alan Mackintosh. McLennan’s great grandfather fought beside Mackintosh at Cambrai in 1917, when the poet was killed. Over the past century, in common with many other Scots wartime writers, Mary’s work has been largely forgotten, he said.

“The War Poet’s Scotland Committee are most grateful to Historic Environment Scotland for this plaque in memory of Mary Symon. It ensures her words are shared publically for many to see in the years to come.  She was not only a fine poet but one who captured the hidden loss in rural communities during the First World War.”

This plaque ensures Mary Symons' words are shared publically for many to see in the years to come. She was not only a fine poet but one who captured the hidden loss in rural communities during the First World War." Neil McLennan

Born in Dufftown on September 5, 1863, Mary’s father John was a saddler, farmer and merchant, who was also Provost of Dufftown. He bought the Pittyvaich estate, where Mary spent most of her life and on which there was a mill next to the Dullan Water. In 1895, he, John Symon, Peter Mackenzie, Richard Stackpole and Charles McPherson converted it to make whisky and production started in 1896 in what is now known as Dufftown Glenlivet Distillery.

Mary’s mother was Isabella Duncan and she had two younger sisters. She went to school at Mortlach Primary, wrote her first poems aged 11 and then went on to the Edinburgh Institute for Young Ladies, where her English master was James Logie Robertson, who wrote in Scots as 'Hugh Haliburton'. Mary also attended classes at the University of Edinburgh, where she was greatly influenced by Professor of English David Masson.

She then moved on to the University of St Andrews and graduated in 1920. As her poetry developed, it was published in Aberdeen University Review and The Scots Magazine and her poetry was later printed in Hugh MacDiarmid's Northern Numbers, a magazine at the heart of the modernist renaissance in Scottish literature.

It was not until she was in her fifties that her poems became well known and caught the public’s imagination. A collection – which included The Glen’s Muster Roll, Dominie Loquitur and The Soldiers Cairn, which dealt with the aftermath of war on a rural community - was published in her first book Deveron Days in 1933. The book sold out within a week, was immediately reprinted and once again sold out. A second edition was printed in 1938 with additional poems.

Mary Symon died at Pittyvaich in 1938 at the age of 74 and is buried in Mortlach Church Yard.

The other war poets remembered by memorials are: Wilfred Owen, Siegfried Sassoon and Robert Graves (at the venue where they met in Edinburgh); Ewart Alan Mackintosh (Dingwall); John Buchan (Perth); Charles Hamilton Sorley (Aberdeen); Joseph lee (Dundee) and Margaret Sackville (Edinburgh).  There is also a national memorial to all Scotland’s War Poets at Makar’s Court in Edinburgh.