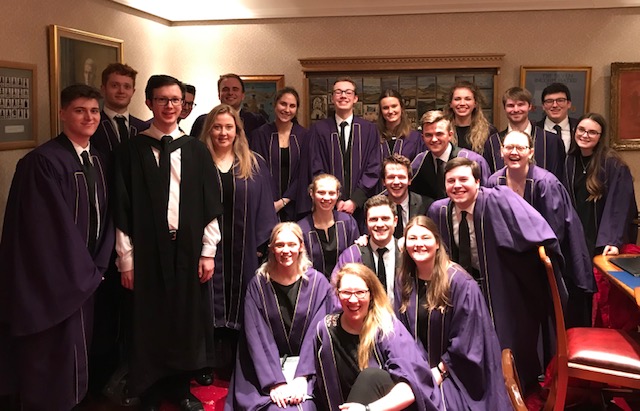 The University's Chapel Choir performed for a very different audience when football's lawmakers made history by holding their first ever meeting in Aberdeen.

The Choir were invited to sing in front of the biggest names from the game – including Fifa President Gianni Infantino - as the International Football Associations Board (IFAB) convened in Aberdeen for its Annual General Meeting on Saturday (March2).

Founded in 1886, this was the 133rd IFAB AGM, with the board holding jurisdiction over potential alterations to the laws of football.

Pavlina Skodova, Choir manager and a Postgraduate student in Strategic Studies and International Law, said they were delighted to take part in the historic occasion – and to take the music of the Choir, which has a growing international reputation, beyond its more usual audience.

“We have been fortunate to perform in some of the best cathedrals and concert halls in the UK and beyond but to perform for football’s elite was a first for everyone.

“To know that the decisions being taken at that meeting will have a direct effect on the game made us appreciate what a high level occasion this was and we were delighted to be invited to be part of it.

“The University is an important part of the city of Aberdeen and we were delighted to be able to showcase what we can do. The performance was very well received and a great experience for all of us.”

The Lord Provost of Aberdeen Barney Crockett: “I am absolutely delighted that the Scottish FA hosted the IFAB Annual General Meeting in Aberdeen for the first time ever, on Saturday, 2 March.

“It was great honour to welcome this world-renowned event to the city, where there has always been and continues to be a huge interest in the game of football.

“The IFAB is steeped in history – its representatives from across the world debate key issues in football and had the opportunity to experience Aberdeen hospitality first hand in the splendid surroundings of Trinity Hall, the home of the centuries old Seven Incorporated Trade of Aberdeen.”