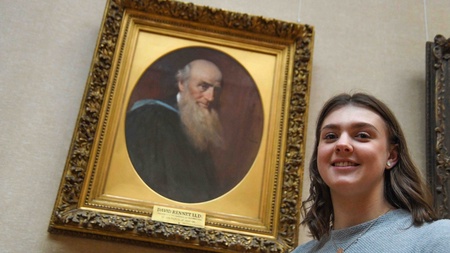 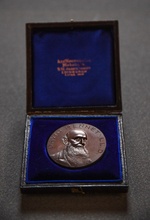 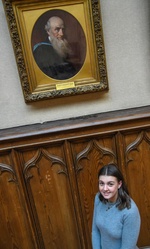 An Australian student has fulfilled a long-held ambition of coming face-to-face with her great, great, great, grandfather who taught at the University of Aberdeen more than 150 year ago.

Alison Ritchie, a pharmacy student from Perth in Western Australia, came to study for a year (in 2018)  at the University of Aberdeen as part of the final year of her course.

Alison’s maternal great, great, great grandfather, Dr David Rennet (1828 – 1914) from Kincardineshire, was a mathematical coach at the University until the early 20th century.

By all accounts Dr Rennet was an extremely popular lecturer who spoke in broad doric while teaching and was skilled in helping gifted students as well as those who were not as academically accomplished.

The David Rennet Gold Medal was inaugurated in 1897 and is still handed out today as the top prize for problem solving in mathematics and physics.

It's great to finally be here and get to see the painting first hand. It's been a great experience." Alison Ritchie

Alison, who moved from Inverbervie to Australia in 2004 when she was just nine, was able to see the portrait of her relative which still hangs in the Picture Gallery at Marischal College.

“Looking at his portrait, he reminds me of one of my mum’s uncles so there must be a familial look. He didn’t have the same long beard though!” she said.

“From what I’ve read about him, he seemed to be a very kind to his students; an approachable man with an interesting teaching style. Apparently he would only help a student once he was sure they had given it a good try on their own first. He didn’t spoon-feed them the answers.

“It’s great to finally be here and get to see the painting first hand. It’s been a great experience.”