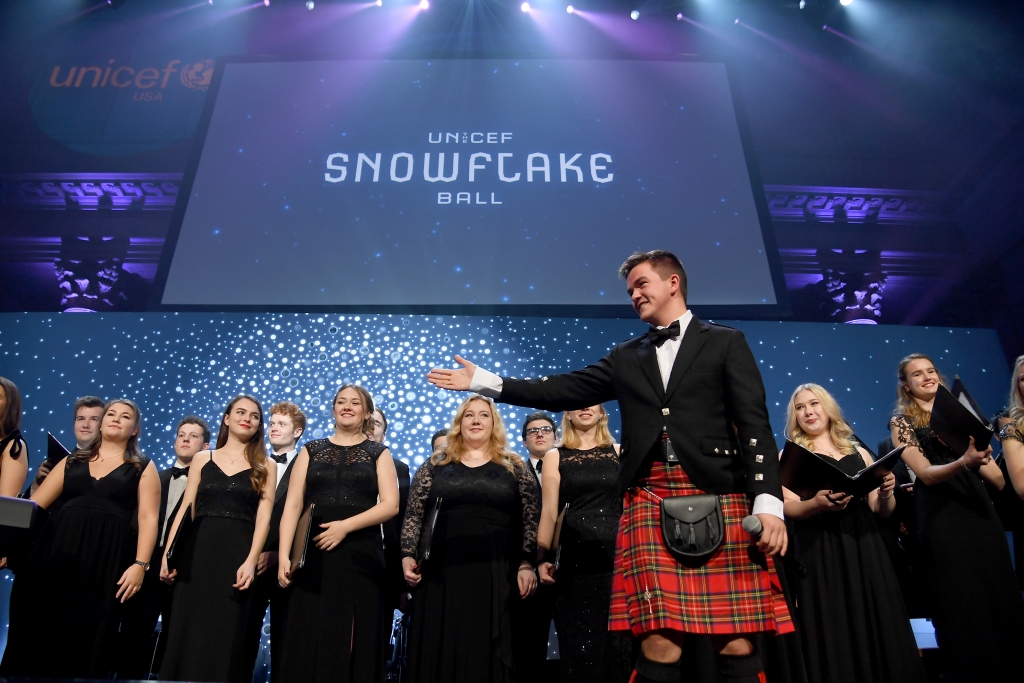 The University of Aberdeen's renowned Chapel Choir brought in the bells early for the elite of New York society following their performance at one of the world's largest fundraising galas.

The Choir performed with Sheryl Crow at the UNICEF Snowflake Ball where they sang a Beatles tribute for Ringo Starr who was seated directly in front of them and declared their rendition of Here Come’s the Sun to be ‘awesome’.

They received a rapturous reception from the audience, which included some of the biggest names in the entertainment industry.

But the choir stole the show at the star-studded after-party when they stepped in to perform an acapella version of Auld Lang Syne when the power temporarily cut out at around 1am.

Choir member Peter MacPherson, who sang the solos during the performances, explains: “The UNICEF Snowflake Ball is one of the most spectacular events imaginable and we were so privileged to be invited to sing with Sheryl Crow.

“It was incredibly nerve wracking, especially as I was the only choir member without music, but it is something none of us will ever forget. Not least because Ringo Starr was sitting just a couple of feet away from us.

“To perform a Beatles song with an international superstar in front of Sir Ringo himself is just mind blowing and when he stood up at the end and said ‘that was awesome’ – it is something that we will all carry with us for the rest of our lives.

“We were then invited along to the after-party which was incredibly generous but unfortunately towards the end the power blew. No one wanted the night to end so we decided that as a choir we should do something to help and we began to sing Auld Lang Syne, very slowly at first but getting faster and faster.

“The response was incredible. It was surreal that this choir from Aberdeen was centre stage with the elite of New York society and they were so complimentary about our impromptu performance. It wasn’t planned but was one of the highlights not just of this year but probably of all our lives.”

Tyler Armstrong, Managing Director of Special Events at the U.S. Fund for UNICEF described their performance as in ‘perfect harmony’.

“The Chapel Choir inspired our audience with the voices of the next generation of global citizens,” he added. “I will never forget the impromptu performance of Auld Lang Syne on the after party dance floor. It was breath taking and the perfect end to the evening.”

The warmth shown to the Chapel Choir on their trip to New York extended well beyond the UNICEF Snowflake Ball.

Peter said he was “overwhelmed” by the love shown to Aberdeen on the other side of the world.

“We were able to meet many former students of the University and it was wonderful to hear their fond memories of the campus and the incredible opportunities that opened up for them thanks to their time at university.

“I never expected opportunities of this kind when I arrived here from Inverness. It’s a cliché but it really was the ‘trip of a lifetime’ and something made all the more special by being a shared experience with so many of my close friends.

“The Choir is like and Aberdeen family but going to the US opened my eyes to the fact that the support for Aberdeen stretches so far beyond this city.

“There are people from all over the world who support music here either through their time, encouragement and connections to open doors for us or who help to meet the costs to ensure that this talented group of student singers can make the most of these opportunities. We are so grateful for that and for the opportunity to represent the University and the city of Aberdeen on such an incredible stage.”

The University’s Chapel Choir also performed a series of carol concerts around Aberdeen and can be heard every Wednesday at their home in the 500-year-old King’s College Chapel.