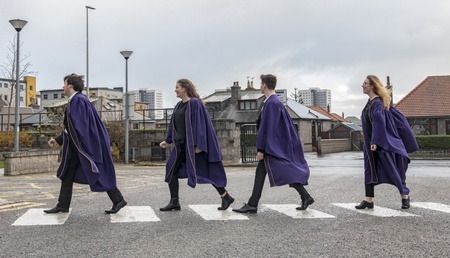 The University of Aberdeen's Chapel Choir - led by Royal composer Paul Mealor - is to take centre stage at one of the world's most prestigious fundraising galas.

University students will sing alongside headline performer Sheryl Crow at the 2018 UNICEF Snowflake Ball in New York on Tuesday November 27.

The gala is a celebration of the work that UNICEF does for children and an opportunity to raise awareness about the critical issues they face.  Since 2004 the Snowflake Ball has raised over 34 million dollars for UNICEF USA.

It also provides an opportunity to honour the contributions made to humanitarian causes by notable public figures and in 2018 the George Harrison Humanitarian Award will be presented to Sir Ringo Starr. In tribute the Choir will join with Sheryl Crow for a special rendition of the Beatles Here Comes the Sun.

Professor Mealor said the occasion was a ‘once in a lifetime opportunity’ for the Choir which rounds off an impressive year which has also seen them perform for Her Majesty The Queen at both her Scottish residence, Balmoral Castle, and Buckingham Palace.

The University of Aberdeen Chapel Choir has also taken to the stage at the world’s biggest music festival, the BBC Proms, and has performed at the Scottish parliament at Holyrood and at the Northern Ireland Parliament at Stormont.

He said: “Our students are incredibly talented and the Chapel Choir is gaining a reputation for the quality of its performances around the world.

“We have been lucky enough to entertain Her Majesty the Queen at the Scottish residence, Balmoral, but to be part of an event as spectacular as the Snowflake Ball – and to perform alongside an artist of the calibre of Sheryl Crow is truly amazing. Better still, we will be helping to contribute to raising funds to support the great work that UNICEF does around the world.

“We are indebted to a number of wonderful donors who enable us to travel extensively both in the UK and overseas – indeed this tour could not have happened without their amazing generosity.”

Professor Mealor understands the significance for his students of their voices being heard on such a big stage. His own music was catapulted to fame when his work Ubi Caritas was selected for the 2013 wedding of Prince William and Catherine Middleton. He has since enjoyed huge success with his work performed at the world’s largest concert venues, including New York’s Carnegie Hall where his tribute to the fallen of the First World War, Requiem Souls of the Righteous, premiered in the US on November 11.

His touching Wherever You Are, written for the Military Wives Choir, reached the number one spot in the UK’s mainstream charts and his albums have been a regular feature at the top of the Classical Charts in recent years.

Despite his personal success, he said leading the University Choir, a role he has enjoyed for the last 10 years, remains his greatest honour.

“The University of Aberdeen has a tradition in choral music stretching back to its foundation more than 500 years ago,” Professor Mealor added.

“It will give me immense pride to be able to showcase how we have built upon that legacy to produce a versatile vocal group as comfortable performing popular music as it is liturgical music.

“We hope that guests at the Snowflake Ball – and especially Sir Ringo Starr - will enjoy our special Beatles arrangement and the new twist the voices of the University of Aberdeen’s Chapel Choir can bring to these wonderful songs.”

“The Chapel Choir has had some memorable performances as part of the life of the University of Aberdeen but this trip I already know will be a highlight.

“There is wonderful music making happening at this University and I am so glad we are being given the opportunity to share our voices across the pond.”

Fellow chorister Pavlina Skodova, a postgraduate student studying for an MSc Strategic Studies and International Law, added: “Today’s Chapel Choir are the successors of the choir appointed upon the foundation of the University in 1495.

“To be part of this wonderful heritage is a privilege in itself, but to represent the University internationally is simply astonishing. I am very excited for our trip to New York and I am thrilled and privileged to have such an amazing opportunity to perform with renowned musicians at the UNICEF Snowflake Ball.

“It is a great honour to be part of such a prestigious event and to help raise funds for a worthwhile cause. We are grateful to our benefactors, our conductor Professor Paul Mealor and to the University for this once in a lifetime opportunity.”

In addition to the Snowflake Ball the University of Aberdeen Chapel Choir will also perform at the following:

The University of Aberdeen Chapel Choir, under the direction of Professor Paul Mealor, will perform the Choral Evensong on Sunday 25th of November from 4-5pm at the Cathedral of Saint John the Divine, the largest gothic cathedral in the world.

The University will partner with the Scottish Government to hold an event at The British Residence in New York City, hosted by Anthony Philipson, the Consul General in New York.