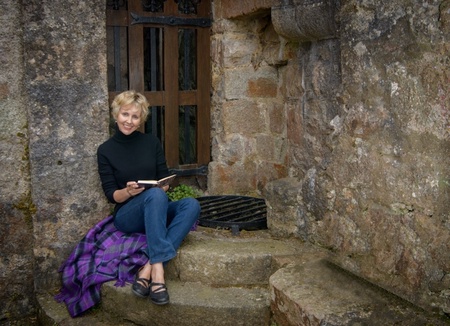 As Scottish Book Week (November 19-25) explores our most rebellious reads, a University of Aberdeen student has had her own work published looking at history's fearless and fabulous felines.

Kimberlie Hamilton, who is studying towards an MSc programme in Cultural and Creative Communications has published Rebel Cats – a new anthology which tells the tales of 30 of the world’s most ‘fur-midable’ moggies.

Kimberlie, who is originally from California, was inspired to write the book after coming across the story of Felicette – a black-and-white street cat from Paris who was sent to space.

She said: “As a nation of animal lovers, it seems we can’t get enough of our four-legged friends and Rebel Cats! Brave Tales of Feisty Felines takes a unique look at the part fearless and fabulous felines have played in our history.

“When we think about heroic animals, we tend to think of dogs before cats, but the story of Felicette was quite remarkable and it set me thinking that there must be many more feline stories which have gone untold.”

Kimberlie added: “This week is Scottish Book Week and the theme is ‘rebels’ - the formidable felines featured in my book are certainly fitting of that title.

“There are several Scottish entries in the book including Towser – the world’s ‘deadliest distillery cat’ from Glenturret, in Crieff. She made it into the Guinness World Record with the title of World Mousing Champion and a credited 28,899 kills.

“Readers can also learn about Mrs Chippy from Glasgow, who lived aboard a ship in Antarctica, and Pyro from Helensburgh who was born on a Royal Air Force base.”

Rebel Cats: Brave Tales Of Feisty Felines is published by Scholastic, and is available for order online or at bookshops including Blackwells on campus, which this week has a special ‘rebels’ display for Scottish Book week.

In addition to feline tales, it also offers facts, tips for cat owners and quizzes.

Kimberlie will follow it up shortly with a book dedicated to canine capers and she is also working on her third book – Scotland’s Animal Superstars – which tells the stories of 25 creatures that have made an impact on Scotland’s history.

“The books have been great fun but it has meant I’ve basically been eating, sleeping, writing and attending classes.

“I’ve been grateful for the support of my teachers and fellow students to get through it. I’m now looking forward to a work placement next session with a local cultural organisation, perhaps VisitAberdeenshire or the National Trust.”