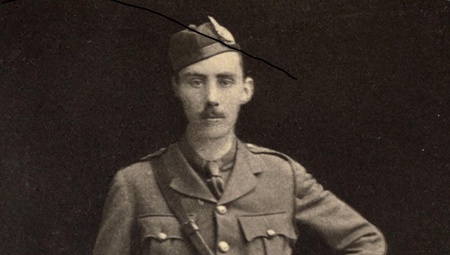 The voices of soldiers, doctors, nurses and ordinary people affected by the First World War will be brought to life at a free event featuring actor and director John Bett and acclaimed singer, songwriter and broadcaster Fiona Kennedy.

The Great War Centenary Remembered will take place on November 2 at the University of Aberdeen’s Elphinstone Hall and has been organised by Professor Steven Heys, Head of the School of Medicine, Medical Sciences and Nutrition and internationally renowned composer, Professor Paul Mealor. It will also include music by his University choir, pipers from the OTC (Officers’ Training Corps), a lone piper and local school children.

The evening will guide the audience through the outbreak of the war and some of the major battles that occurred as both sides tried to end the deadlock of trench warfare. Professor Heys said the event would connect the audience to those involved or affected by the conflict by drawing on personal testimonies, poems and words of those involved or affected by the conflict to allow their stories to be told in their own words.

He said: “We are delighted to welcome the fantastically talented John Bett, known for his roles in many film and theatre productions including Tess and Gregory’s Girl, A Very English Scandal and the Golden Compass, soloist Fiona Kennedy to give ‘voices’ to these important stories.

“Roles and words will come from University staff and students. This will allow the audience to connect with the First World War on a very personal level and it is by exploring these stories that the reality of the horror of the conflict can be fully understood.

“For one member of our cast, the poem he will read will be particularly poignant as his own great grandfather was next to the poet when he was killed in battle.”

Neil McLennan from the School of Education will read the poem Cha Till Maccruimein, Departure of the 4th Camerons, by Ewart Alan Mackintosh.

Mackintosh, whose work begins ‘The pipes in the street were playing bravely, The marching lads went by, With merry hearts and voices singing, My friends marched out to die’, was in action at Arras in May 1916. He was awarded the Military Cross for his actions in the raid but the injuries sustained by one of his men, Private David Sutherland, who lost limbs and had to be left on a German parapet to die, deeply affected him and inspired his poetry.

In Cha Till Maccruimein, he foretells his own death – a line that will resonate greatly with Mr McLennan’s whose great grandfather, Roderick McLennan, was by his side when he fell.

For one member of our cast, the poem he will read will be particularly poignant as his own great grandfather was next to the poet when he was killed in battle" Professor Steve Heys

Mr McLennan said: “Great War Centenary Remembered will help the audience to engage not only with the difficulties of the war but with the spirit of comradery, friendship and hope displayed by so many of those who took part.

“I am honoured to be reading the work of Ewart Alan Mackintosh at this wonderful event. My great grandfather held him high regard and he was known as ‘Tosh’ affectionately by his troops as their well-being was always uppermost in his mind.

“The only time my great grandfather, like many of his generation, ever discussed the war was at New Year and although I had heard him recount the story of how his friend fell, I didn’t realise it was Mackintosh until I began to investigate Scottish war poets as part of my own research.

“Reading the poem will be an emotional experience for me and I hope that this, and the words spoken by all those taking part in the evening, will help the audience connect to these stories at a time when it is important we remember the sacrifices made by so many.”

Great War Centenary Remembered will use other testimony to tell the stories of pivotal events throughout the conflict including the famous Christmas truce of 1914, the first use of gas in the trenches in 1915, and the huge casualties of the Somme in 1916 and at Passchendaele in 1917.

Professor Heys added: “In this centenary year of the end of the First World War we wanted to stage an event that would allow those who have little knowledge of the conflict as well as those who have an active interest in the period to engage with the subject in a new and interesting way.

“With such a wonderful cast supported by a very talented choir and pipe band it promises to be a very fitting occasion.”

Great War Centenary Remembered will take place in Elphinstone Hall at the University’s King’s College Campus on November 2 from 6.30pm to 8pm. Tickets are free of charge but must be reserved in advance by visiting https://www.abdn.ac.uk/events/13696/

Tickets can be reserved here