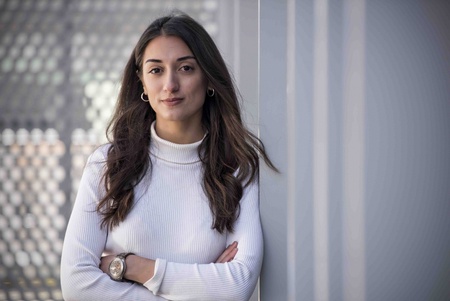 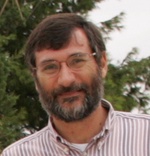 Elina Stamatelatou says the decision to move from Greece to study Medical Physics at the University of Aberdeen was an easy one for the simple reason that Aberdeen has an established reputation for excellence in the field.

But any niggling doubts she may have had about moving two and a half thousand miles away to complete the next stage of her education would have no doubt been eased by her father, Ion - after all, he made exactly the same journey to study the very same subject 34 years previously.

Speaking as she enters the last six months of the programme, Elina describes her decision to come to Aberdeen as the “perfect choice”.

“There is a tradition in Medical Physics at Aberdeen, so for a student who chooses to study Medical Physics it is a perfect choice.  Scotland is also beautiful, so choosing Aberdeen they will have the opportunity for high quality education and also visit a scenic country as well.

“As soon as I made my choice regarding the field of study it was an easy choice to come to Aberdeen, since the University has an established reputation in Medical Physics and runs a well-known MSc program. Nevertheless, the fact that he had done this program and his positive response gave me confidence that my choice was correct.”

“The lecturers here are very knowledgeable and have a great interest in their area. The course was very intense and I had to work hard, but the knowledge I have gained makes it well worth the effort.

“Aberdeen is a small but wonderful city. Although the course was very intensive and my free time was very limited, I had the chance to enjoy Aberdeen and, also, did some trips in Scotland. A hiking trip with the whole MSc class at Loch Muick was certainly one of the highlights. I hope that during the summer I will have the opportunity to travel more.”

The Medical Physics program at the University of Aberdeen is celebrating its 50th anniversary in 2018 and is marking the occassion with a special event. Its long and sustained reputation for excellence is perfectly illustrated by this story of two generations of the same family choosing to trust it as the place to continue their educational journey.

Ion Stamatelatos, currently Director of Research and Head of the Nuclear Research Reactor Lab at the Institute of Nuclear and Radiological Sciences, Technology, Energy and Safety in Athens, completed the MSc in Medical Physics and Bioengineering in Aberdeen between 1983 and 1984. With no Medical Physics program available in Greece at that time, Ion was forced to look abroad to continue his studies and the University of Aberdeen’s expertise in the area made them the obvious choice.

“The most exciting research was being produced in Aberdeen at that time. It was the first center in the world to build a whole-body sized Magnetic Resonance Imaging scanner and conduct a diagnostic MRI scan.  But other important research work was also taking place in diagnostic imaging using ionizing radiation techniques.  For me, as an MSc student, it was a great privilege to have the opportunity to attend lectures by pioneers in the application of Physics in Medicine and the Healthcare, such as Prof Mallard, Dr Hutchinson, Dr Evans, Dr Ettinger and Dr Sharp to mention just a few.

“It was a time of intense work but a very productive period as well. Although I had a very good background in Physics, I had to work very hard in order to cope with the other disciplines as well.

“But it was not only hard work. I did a lot of hiking trips and enjoyed the Scottish countryside a lot. I also learned at a firsthand the unpredictability of the Scottish weather! I will always remember the warmth and hospitality of the home of Dr Noel Evans and his wife Mrs Catherine Evans during my stay in Aberdeen. I still exchange cards and news every Christmas with Catherine.

“However, there is no doubt that the highlight was meeting my wife Anthi, during the Aberdeen Youth Festival in the summer of 1984. So, Elina is connected to Aberdeen from two sides!”

Despite his fondness for the city and the University, Ion says he never suggested Elina follow in his footsteps.

“Elina took the decision to apply to Aberdeen by herself. However, I am sure that my excellent opinion about the University of Aberdeen and in particular for the Medical Physics department, as well as the good memories from Aberdeen did play a role. Of course, I was delighted to hear and support her choice.

“Medical Physics offers diverse opportunities for a career in Health Care, Protection and Safety, Research and Development as well as the private sector.  Although I do not know what she will decide to do next, as a parent I feel very happy that she may have open options to decide what is best for her future.”

Since graduating from the University of Aberdeen, Ion’s completed his PhD in Applied Nuclear Science in Birmingham and moved back to Athens after a short stint in the US. His current work is in the area of fusion technology.

In terms of her career, for now Elina’s is open to the opportunities that may await.

“I am trying my best for the course, so I do not have a definite plan for the future yet. Medical Physics offers diverse opportunities for a career in health service, the private sector or in research and development. A research project would intrigue me.

“On finishing my final project I hope that I will have enough experience gained to take the best possible decision for my future.”

The MSc in Medical Physics, a joint venture between staff from the University of Aberdeen and NHS Grampian, admitted its first student in 1968. A special event to commemorate the 50th anniversary is being held on November 2. The event will mainly consist of talks by some former students and is a chance to celebrate the achievements of all our graduates. The event is open to all former students and any interested staff from the two organisations

To book, visit this page and for the full programme, see here: 50th_Anniversary_Programme.pdf.