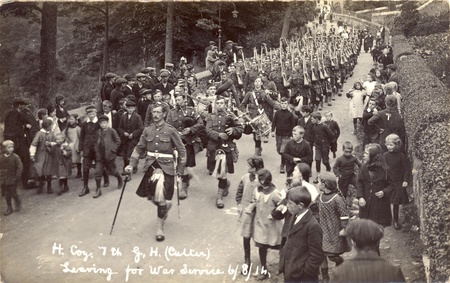 Tickets have been released for a special commemorative event at the University of Aberdeen to mark the end of the First World War, in a week when the institution marks the anniversary of the tragic loss of the majority of its own battalion, U-Company.

The Great War Centenary Remembered will take place on November 2 and has been organised by Professor Steven Heys, Head of the School of Medicine, Medical Sciences and Nutrition. It will feature the well-known actor and director John Bett and acclaimed singer, songwriter and broadcaster Fiona Kennedy. The free event will also include music by the internationally renowned composer, Professor Paul Mealor, and his University choir and pipers from the OTC (Officers’ Training Corps).

The evening will guide the audience through the outbreak of the war and some of the major battles that occurred as both sides tried to end the deadlock of trench warfare. One of these great battles was at Loos which started on 25th September 1915.

The battle is synonymous with the University’s own company (U-Company), which formed part of the 1st and 4th battalion of the Gordon Highlanders. Many of its ‘student soldiers’ were killed or wounded in the days of fighting that followed at Hooge, near Ypres, during what was a diversionary attack to deflect attention from the main assault at Loos.

So heavy were the losses that following the battle U-Company ceased to exist with most of the survivors from the unit either returned to their studies at the University after being declared medically unfit or drafted into other regiments. The names of those killed are inscribed on the walls of King’s College Chapel.

The Great War Centenary Remembered will explore the impact of the war on societies across Europe and will feature readings, poems, photographs, film and music.

Professor Heys said this was an opportunity to mark the end of the Great War and to reflect on personal stories from those who were there and how they saw things through their own eyes.

“When we hear that the First World War claimed the lived of more than 20 million people, it is almost impossible to imagine the scale and impact on life, not just on those who fought but across society as a whole,” he added.

It will be an evening of discovery, reflection and remembrance told in an interesting and engaging way" Professor Steve Heys

“The University’s own U-company certainly reflect this. They fought together and many died together. When our then Principal George Adam Smith read out the names of the staff and students whose lives had been lost in the Chapel, it tragically included two of his own sons.

“With so many other battalions of men from the same area, sports clubs, universities and towns - the so-called ‘Pals’ Battalions - communities in Great Britain and Ireland were affected on a scale never seen before, with so many men becoming casualties.”

To help convey the all-pervasive nature of the war, Great War Centenary Remembered will draw upon personal accounts and memories. John Bett, known for his roles in the films Tess and Gregory’s Girl, A Very English Scandal and the Golden Compass, soloist Fiona Kennedy and staff and students from the University, will take on the thoughts and words of real soldiers, doctors, nurses and others who witnessed events to present their testimony and allow the ‘voices’ to be heard.

Professor Heys added: “We are delighted to welcome John Bett and Fiona Kennedy to the University for this important event.

“Both have lent wonderful support to the programme and, together with local school children and the University’s Chapel Choir, will help the audience to engage not only with the difficulties of the war but with the spirit of comradery, friendship and hope displayed by so many of those who took part.

“It will be an evening of discovery, reflection and remembrance told in an interesting and engaging way.”

Great War Centenary Remembered will take place in Elphinstone Hall at the University’s King’s College Campus on November 2. Doors will open at 6pm and audience members must be seated by 6.20pm. The event will conclude at 8pm. Tickets are free of charge but must be reserved in advance by visiting https://www.abdn.ac.uk/events/13696/