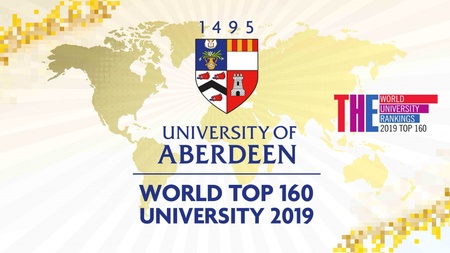 The University of Aberdeen has climbed 27 places to make it into the world's top 160 universities in the latest Times Higher Education (THE) World University Rankings.

At 158th place, it is the University’s highest placing in the rankings since 2012, placing it third in Scotland and 22nd within the UK – a rise of six places on last year’s UK rankings.

The THE World University Rankings are the definitive listing of the world’s top universities, and are measured across a broad range of criteria including research, teaching, and international outlook.

Among the areas where Aberdeen performed strongly was in research, where the University jumped 64 places in terms of research citations, to 67th in the world.

On international outlook, which is measured on the basis of student diversity and the extent of its global academic collaborations, the University has been ranked 29th in the world.

“The University of Aberdeen is at its core a research-led institution placing world class research, teaching and innovation at the centre of all our activities.

As a University with a strong focus on innovation it is satisfying to be acknowledged internationally for the quality of our research and teaching. " Professor George Boyne, University of Aberdeen Principal

“Our progress into the world’s top 160 universities reflects the excellent global impact of our citations in key areas of economic, environmental and societal importance.

“Earlier this year the University was awarded the Queens Anniversary Prize for our contribution to health services research, and our rise in the World University Rankings is further testament to the quality of our research output across a diverse range of disciplines.”

Professor George Boyne, Principal, added: “This is a magnificent achievement, following on from last week’s honour in being named Scottish University of the Year by the Times and Sunday Times Good University Guide.

“As a University with a strong focus on innovation it is satisfying to be acknowledged internationally for the quality of our research and teaching.

“Equally, our international outlook ranking is indicative of Aberdeen’s status as a global university, reflected through our research collaborations and partnerships such as our first overseas campus in Qatar, as well as the diversity of our staff and student population.

“On behalf of the University I’d like to thank everyone who has worked so hard to make this achievement possible.”