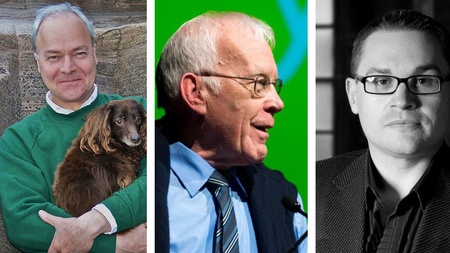 Professor Paul Mealor is professor of Music at the University of Aberdeen. His setting of Ubi Caritas was performed at the wedding of Prince William and Kate Middleton in 2011. His composition for the Military Wives Choir, Wherever You Are was issued as a charity single in aid of the Royal British Legion and SSAFA (Soldiers, Sailors, Airmen and Families Association) Forces and was the Christmas No 1 of 2011. He is one of the leading composers of classical music in the world.

Very Rev Professor Iain Torrance was appointed to the staff University of Aberdeen in 1993 and was promoted to a personal chair in 2001 and in the same year he was made a Scottish Royal Chaplain. He was Moderator of the General Assembly of the Church of Scotland 2003–2004, president of Princeton Theological Seminary in the US from 2004 to 2012 and made a knight bachelor in the New Year’s honours list 2018

Sir Ian Wood KT, GBE, Kt, CBE is a one of Scotland’s most successful businessmen He established the Wood Foundation to support charity projects home and abroad. One recent project support by the Wood Foundation is the new Lady Helen Parking Centre for use of patients and visitors only.