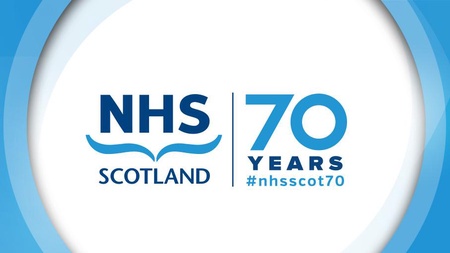 The National Health Service is celebrating its 70th birthday today and is credited with transforming the nation's health and pioneering medical innovation.

The University of Aberdeen has played its own significant role in changing the face of our health service and continues to innovate in medical research and in training the doctors and health professionals for the future.

Today MRI (Magnetic Resonance Imaging) scans are a routine part of medicine and hundreds are carried out every day in NHS hospitals – and those around the world – but this vital piece of equipment owes its origins to a team of visionary medical physicists led by the University of Aberdeen’s Professor John Mallard.

They developed and tested the MRI body scanning machine which they used to scan the very first patient in August 1980 and subsequently brought its widespread use to the medical profession.

The University continues to lead the world in this area and in November last year a team of Aberdeen scientists achieved another medical first when they scanned the first patients using a ground-breaking 'Fast Field Cycling' MRI scanner, likened to "100 MRIs in one".

Professor David Lurie said the technology ‘greatly expands the diagnostic potential of the machines’ and said that conducting the first scan marked “a major step towards our technology being adopted by hospitals to benefit patients, which is the ultimate goal of our research.”

A decade before the National Health Service came into existence, another medical pioneer, Dugald Baird was appointed Regius Professor of Midwifery at Aberdeen – a post he would hold for almost 30 years and use to transform the care of mothers and babies.

Baird was the first to show the huge effect of social factors on obstetric outcome and was a strong supporter of fertility control and reproductive rights for women. Under his leadership Aberdeen became a Mecca for obstetric practice and research, so much so that for a time Aberdeen had the best birth outcomes in the UK, and among the best in Europe.

His work underpinned the roll out of formal Family Planning services across the NHS in Scotland in 1974 and his name will continue to provide the benchmark in the field when Aberdeen’s newest hospital – the Baird Family Hospital – opens in 2020.

It will offer maternity, gynaecology, breast screening and breast surgery, neonatal, and reproductive medicine services and will sit alongside a research centre which will allow University teams to continue their pioneering work in this area.

The NHS could be further transformed by the discovery of another Aberdeen academic, Professor Hans Kosterlitz, credited with the co-discovery that the brain produces morphine-like chemicals.

In 1973 they made the dramatic breakthrough by discovering, isolating and synthesising the mysterious substance occurring naturally in the human body and having a morphine like action which they named Enkephalin.

The University is now home to the Kosterlitz Centre for Therapeutics which seeks to facilitate the translation of biological innovation into new ways of treating, diagnosing and understanding diseases.

Four decades on, scientists around the world are using Kosterlitz's discovery to work towards the eventual development of non-addictive pain killers as effective as drugs such as morphine.

And it is not only in pain relief that a historic Aberdeen discovery continues to have a lasting impact on our health services.

When the Institution’s Professor of pathology, Sir Alastair Currie, published research in 1972 showing how cells are programmed to “commit suicide”, which he named apoptosis, he could little have imagined that today it would still underpin international research into cancer and other diseases.

The University is continuing his legacy for world-class cancer research in the city with the development of a programme to support the NHS in transforming the lives of thousands of people living with cancer.

The Development Trust has launched a £4.5million fundraising campaign to attract the world’s brightest minds to Aberdeen to build on, and take to the next stage, the oncology research already underway at the University in areas including breast cancer, urological cancer and cervical cancer and aims to increase activity in other key areas such as lung, prostate and colorectal cancers.

It has already attracted the support of Scottish charity Friends of ANCHOR, which has committed to raise £1million for the project.

Other priorities for the University as the NHS celebrates its 70th year include the fight against fungal superbugs, which cause more deaths that MRSA and E.coli, and relieving the burden of osteoarthritis with innovative research seeking to revolutionise its treatment.

Throughout the seven decades of the health service, the University has played an integral role in the training of its doctors and other health professionals and was recently given a seal of approval for the standard of its teaching in The Guardian University Guide with Medicine ranked top in Scotland and forth in the UK and Dentistry as second in the UK.

A new ‘GP-enhanced’ medical degree is helping to address a UK-wide shortages of GPs, while the Gateway 2 Medicine scholarship programme is supporting those from less privileged backgrounds to study medicine.

As well as marking a milestone for the NHS, this week also gives rise to celebrations at the University with its Health Economics Research Unit celebrating 40 years of world-class research last year and our Health Services Research Unit which is 30 years old this month (July 5).

Fittingly, these areas have been recognised with the award of the Queen’s Anniversary Prize, which recognises work regarded to show excellence, innovation and tangible beneficial effects in the wider world.