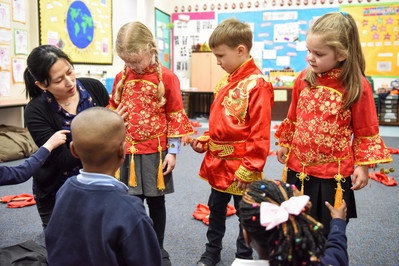 The Confucius Institute of the University of Aberdeen is to host a special performance of the Scottish Opera Primary schools 2018 tour the Dragon of the Western Sea.

Three Aberdeen primary schools – St Peter’s, Seaton and Woodside – will visit the Old Aberdeen campus on Friday June 1 to rehearse and perform an opera about the exciting voyages of 14th century Chinese commander, Admiral Zheng He.

Entitled The Dragon of the Western Sea, it has been composed by Alan Penman with lyrics by Ross Stenhouse. Pupils learn the words and songs in their own classrooms and then work with a Scottish Opera team to prepare for a performance in front of classmates, friends and family.

The Confucius Institute at the University has been working with the primary schools to help pupils learn about Chinese culture and to teach Manderin.

Director Michelle Macleod said the performance at Elphinstone Hall was a great opportunity for pupils to showcase what they have learned in a unique way.

“We are delighted to support Scottish Opera’s Primary Schools Tour which has provided pupils from primaries five, six and seven with an opportunity to take part in this interactive musical experience.

“We work closely with our local primary schools to deliver classes in Mandarin, Chinese dance, calligraphy and other cultural activities.

“The pupils have shown a great aptitude for learning and we are looking forward to seeing the result of all their hard work performed in our magnificent Elphinstone Hall.”

Their performance will tell the tale of Admiral Zheng and his vast fleet of ships with 28,000 crew which set sail from China to Indonesia, India, Arabia and the grasslands of Africa in search of trade, treaties and treasure.

Scottish Opera’s Director of Education and Outreach, Jane Davidson said: “The composer and librettist were inspired by this real life story to create a dramatic tale of adventure on the high seas.

“The plot gives us a wonderful opportunity to introduce Scottish primary pupils to a different perspective on the age of discovery. Admiral He predated the journeys made by European explorers by many years. Using a blend of musical styles as well as key words and phrases from China, Africa and India, the opera provides a fascinating snapshot of the history and customs of other cultures in an appealing and accessible way.”