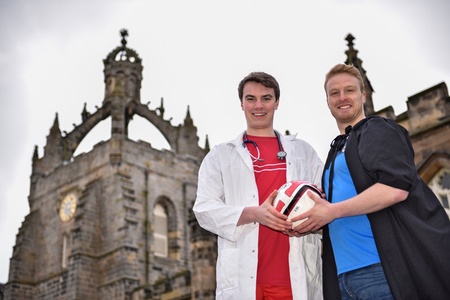 University of Aberdeen student footballers are to revive the age-old grudge match between medics and lawyers to raise money for the battle against cancer.

We're happy to revive this charity challenge match and hopefully it will raise a decent amount of money for a great cause." Dominic Coates, University of Aberdeen Medical Society

The two rival professions used to compete annually on the football pitch for glory and bragging rights but the tradition has been on hiatus.

Now, the fixture has been re-established to raise money for Friends of ANCHOR who are fundraising for the University of Aberdeen’s new cancer centre research team.

The match is to be held at Hillhead football pitch on Monday March 12, kicking off at 7pm.

“We’re looking forward to taking time out from learning how to save lives to put these law students in their place!” joked Dominic Coates from the University’s student Medical Society.

“Seriously though, we’re happy to revive this charity challenge match and hopefully it will raise a decent amount of money for a great cause.

“There is sheltered seating for 200 people at Hillhead so we are encouraging everyone to come out in force to support their teams.”

Sam Conington from the University’s student Law Society added: “The El Clasicos and Old Firms of the world cannot compare to the age-old rivalry between the Medical and Legal Professions.

“It’s great to re-start this tradition and who knows, it may lead to the two disciplines going head-to-head in a number of different sports in the future.  We’re hoping there will be a good-natured element of ‘tribalism’ which will encourage a big crowd.

Ultimately though, the simple fact is lawyers are better than medics and on Monday we will prove it!”

The medics’ team are currently enjoying a successful season in their British Universities and College Sport (BUCS) league whilst the Lawyers XI will be handpicked from the best of Aberdeen University Football Club.