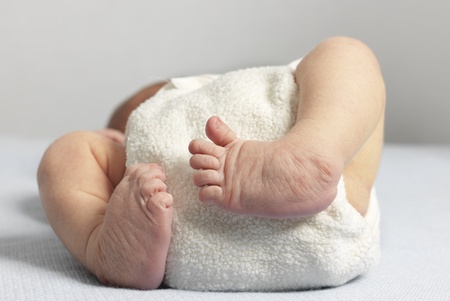 A gene which could play a role in causing the most severe cases of club foot has been identified by scientists at the University of Aberdeen.

Club foot is a lower leg abnormality, where babies are born with the foot in a twisted position, facing inwards and upwards rather than flat to the floor.  It is quite common, affecting about 1 baby in every 1,000 born in the UK. Of those 1,000 about half have the condition in both feet.

The causes of club foot are very poorly understood, though it sometimes runs in families and it is known that genes are involved.

Experts believe the condition is a neuro-muscular problem – a result of muscle weakness in the legs during development. However it is difficult to pinpoint the causes because there are so many different things that can cause muscle weakness.

The condition requires lengthy treatment involving manipulation, putting the feet in a cast (called the Ponseti method) an operation and then a requirement to wear specialised boots joined together by a metal bar at night until the age of four or five years old.

In severe cases, which are often associated with failure of the nerves to calf muscles, even after this treatment the foot can bend back, meaning a more invasive surgery is required.

This is, hopefully, another piece in the puzzle of what causes club foot in humans. " Professor Martin Collinson

The Aberdeen team believe they may have identified a gene in a mouse model which is linked to the more serious cases of club foot in humans.

The gene (Limk1) is required for normal nerve growth and have shown to be part of a pathway of genes, one of which is already known to be linked to club foot in mice.

Professor Martin Collinson, a geneticist from the University of Aberdeen, and leader of the study says: “This is, hopefully, another piece in the puzzle of what causes club foot in humans. Our hypothesis is that probably for most human club foot patients, it’s not just one gene that goes wrong, there are probably predisposed mutations in several genes in these pathways and they add up to eventually cause muscle weakness.

“The next stage is to look at DNA samples taken from human clubfoot patients and screen them to see if there are mutations in these pathways.

“Club foot is commonly treated successfully using the Ponseti method but it may be that the feet of children with these gene deformations will just revert back once treatment is finished. In theory if we could screen children for these genes before treatment starts, then they could avoid years of unnecessary interventions.”