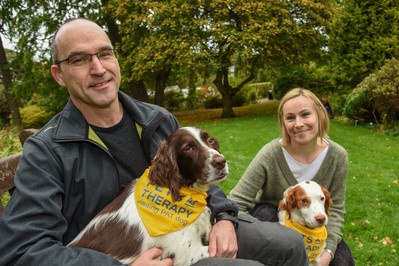 Students at the University of Aberdeen may have noticed two friendly, if a little furry, faces around Old Aberdeen recently.

Pablo and Ollie Baird have been helping students to settle into University life, offering comfort to those who may be feeling homesick or just being a companion to anyone wanting to chill out.

However Pablo and Ollie are no strangers to University life, and have been coming to campus with their humans, John and Emily Baird, for years.

John, a senior lecturer in the School of Biological Sciences and Emily, a disability advisor within Student Support, decided that Pablo and Olly would be ideal candidates to register with the charity, Pets as Therapy (PAT). The two boys were put through their paces and are now fully qualified volunteers, having come through the PAT application process with flying colours.

In order to become a registered ‘therapet’ Pablo, a Brittany Spaniel and Ollie, a Springer Spaniel, had to demonstrate that they could walk relaxed on a lead, and had to show that they accepted being stroked and handled, as well as having their paws, tail and ear touched by an assessor, to ensure that they would be comfortable with strangers patting them. They also had to show that they wouldn’t feel worried or be spooked by sudden noises or disturbances.

John and Emily also had to show that they could remain in control of the boys whilst holding a conversation with the assessor as well as demonstrate that the two dogs were fit and healthy, in order to ensure Pablo and Ollie could cope with demanding social and physical situations.

There's a lot more to find out about the really positive aspects of dog-human interactions, but it's now known that dogs and humans have the same hormonal response when we look into each other's eyes - we both release oxytocin, which is sometimes called the 'love hormone'." Dr John Baird

John explains: “Ollie and Pablo have been coming to work with me for years and are already well known within the School of Biological Sciences – I’m under no illusion that the reason I get lots of visitors to my office is because of the boys!

“There’s a lot more to find out about the really positive aspects of dog-human interactions, but it’s now known that dogs and humans have the same hormonal response when we look into each other’s eyes – we both release oxytocin, which is sometimes called the ‘love hormone’. Oxytocin is involved in maternal bonding, trust and altruism and may explain why therapy dogs elicit such positive responses in the humans they interact with.

“They’re great dogs and have fantastic temperaments so when Emily suggested we get them registered with PATS it seemed like a great idea - now they could spread their canine joy in an official capacity!”

Ollie and Pablo are now visiting the Hillhead community lounge every Thursday night from 7pm to 9pm for Chill with Canine Companions and all students are welcome to drop by.

Emily added: “Ollie and Pablo are Therapy Dogs so they can help to provide stress relief, improve social interaction and enhance self-esteem. But also, it's just fun to be around some friendly hounds, so I would encourage anyone who is perhaps missing their dog from home – or who just loves dogs – to come along. The boys bring so much joy to our lives so hopefully they can do the same for others!”